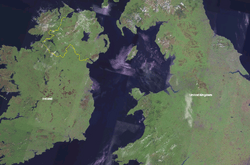 NASA map of the Irish Sea

The Irish Sea (sometimes called the Manx Sea) is a body of water that separates Ireland and Great Britain. It is known to be one of the most polluted seas in the world including the North Sea and the Mediterranean Sea. The sea is important to regional trade, shipping and fishing. It is a source of power generation in the form of wind power and nuclear plants. Annual traffic between Great Britain and Ireland amounts to over 12 million passengers and 17 million tonnes (17,000,000 long tons; 19,000,000 short tons) of traded goods.

The Irish Sea has 17 active oil and gas drilling platforms. It is estimated there are about 1.6 billion barrels of oil in the Barryroe oil field alone.

All content from Kiddle encyclopedia articles (including the article images and facts) can be freely used under Attribution-ShareAlike license, unless stated otherwise. Cite this article:
Irish Sea Facts for Kids. Kiddle Encyclopedia.