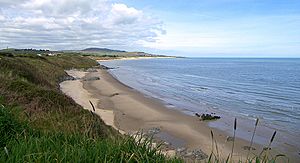 Brittas Bay (Irish: Cuan an Bhriotáis) in County Wicklow, Ireland is a 4 kilometres (2.5 mi) stretch of beach on the Irish Sea coast, about 12 kilometres (7.5 mi) south of Wicklow. The beach and associated dunes are very popular with Dubliners and are one of the most frequented beaches by residents of the capital during the summer. 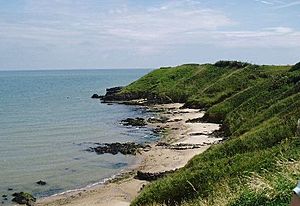 The 4 kilometres (2.5 mi) long beach is accessed from the R750 regional road which runs parallel to the beach, separated from it by extensive areas of sand dunes. It is 12 kilometres (7.5 mi) by road south of Wicklow and about 65 kilometres (40 mi) south of the city centre of Dublin. Brittas Bay is in the civil parish of Dunganstown in the barony of Arklow on the southern coast of County Wicklow.

There was a Christian settlement in nearby Three-Mile-Water prior to St Patrick's arrival in Ireland. This settlement was presided over by a Roman prelate Palladius, who was sent by Cellestine to Ireland in 431 AD. He was assisted by two monks named Sylvester and Solinus. Later St Baoithin ruled over a monastery in the area and one of his pupils was St Kevin who founded the Christian settlement in Glendalough.

A 17th Century smuggler and pirate Captain Jack White operated from Jack's Hole, a secluded cove where he intercepted goods from British merchant ships and imported goods from France to the annoyance of Crown authorities who were thus deprived of customs revenue.

Several caravan parks are in the vicinity including Staunton's Caravan Site, O'Drischoll's Caravan Park and Brittas Bay Park. The European Club golf club is to the south near the hamlet of Ardanary on Mizen Head. Dunganstown Castle lies to the northeast of Brittas Bay.

All content from Kiddle encyclopedia articles (including the article images and facts) can be freely used under Attribution-ShareAlike license, unless stated otherwise. Cite this article:
Brittas Bay Facts for Kids. Kiddle Encyclopedia.