Kids Encyclopedia Facts
Not to be confused with Ireland's Eye, Newfoundland and Labrador. 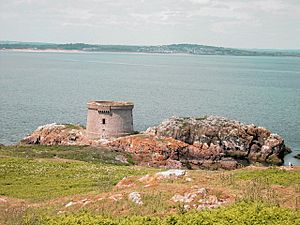 Ireland's Eye (Irish: Inis Mac Neasáin) is a small uninhabited island off the coast of County Dublin, Ireland, situated directly north of Howth Harbour. The island is easily reached by regular tourist boats. The island is currently part of the county of Fingal, for administrative purposes, but was at one time part of the city of Dublin. The island was for centuries part of the Howth Estate, but was sold to the Tetrarch investment group in a deal announced in 2018. 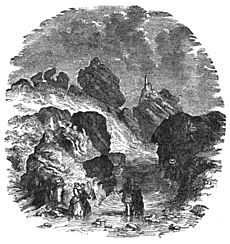 In Celtic times the island was called Eria's Island. Eria was a woman's name and this became confused with Erin, derived from Éireann, the Irish name for Ireland. The Vikings substituted the word Island with ey, their Norse equivalent, and so it became known as Erin's Ey and ultimately Ireland's Eye. The island was also known formerly as Inis Faithlenn.

The Garland of Howth manuscript is said to have been mostly written at the abbey on the island sometime between the 8th and 10th century.

The island was the original site of the village's church, and also an early element of the Howth estate when the St Lawrence family took over the area.

In June 2015 a large portion of Ireland's Eye was scorched by gorse fires.

In October 2018, the Gaisford-St.Lawrence family announced their agreement to sell Howth Castle and demesne, and Ireland's Eye, to the Tetrarch investment group, as part of a multi-million euro deal, and for the first time in many hundred years the freehold of the island passed outside of the family of the Lords of Howth.

Ireland's Eye comprises the main island, a range of rocks and an islet called Thulla. The most spectacular feature is the huge freestanding rock called "the Stack", at the northeastern corner of the island.

The island has one regular spring, located near the site chosen for the Martello Tower.

The island as a whole and especially the Stack, play host to a large variety of seabirds, including thousands of guillemots, razorbills, fulmars and gulls. Ireland's fifth gannet colony became established on the Stack in the 1980s, and there are now a few hundred pairs breeding there each year. There is a large cormorant colony on the main island, and a few breeding pairs of puffins.

Grey seals are abundant in the sea around the island.

The ruins of a Martello tower and an 8th-century church (the Church of the Three Sons of Nessan) are the only signs of previous habitation.

The church functioned as parish church for Howth until recent centuries, eventually being replaced by a church in the village due to the limitations of having to take a boat for every service.

The Martello Tower, built in 1803, was one of three constructed in the Howth area, on the instructions of the Duke of York to repel a possible invasion by Napoleon. Its window entrance, 5 metres above ground level, can be accessed by a rope that hangs down from the window.

Ireland's Eye is served by two small boat companies from Howth Harbour in the summer months, and some visitors reach it in their own watercraft. As of 2020, access to the island has never been restricted and there is no admission charge. Other tourist boat services navigate around the island, but do not dock.

The island has long been established as a minor rock-climbing location. About 28 routes have been recorded since the 1940s, though it is believed that climbers have operated on the island since the 1910s or before. Climbing does not take place during the seabird nesting season of April to July.

All content from Kiddle encyclopedia articles (including the article images and facts) can be freely used under Attribution-ShareAlike license, unless stated otherwise. Cite this article:
Ireland's Eye Facts for Kids. Kiddle Encyclopedia.