Calf of Man facts for kids

Calf of Man (Manx: Yn Cholloo) is a 2.50-square-kilometre (618-acre) island, off the southwest coast of the Isle of Man. It is separated from the Isle of Man by a narrow stretch of water called the Calf Sound. Like the nearby rocky islets of Chicken Rock and Kitterland, it is part of the parish of Rushen. It has only two seasonal inhabitants. The word 'calf' derives from the Old Norse word kalfr which means a small island lying near a larger one. It is possible to reach the Calf of Man by boat from both Port Erin and Port St Mary. Cow Harbour and South Harbour are the main landing places. The highest part of the island is in the west where an unnamed peak reaches 415 ft (126 m) above sea level. 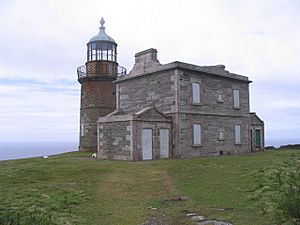 Calf of Man, Lower Lighthouse One of two built by Robert Stevenson in 1818 to steer ships clear of Chicken Rock. Now disused

Between the Isle of Man and the Calf is the islet of Kitterland, while the islets of Yn Burroo and The Stack lie close to the Calf's shore. The southern shore of the island encloses a small bay called The Puddle. Almost a mile southwest of the Calf is Chicken Rock, the most southerly part of the Isle of Man's territory.

Calf of Man is home to a breeding population of Manx shearwaters, a seabird which derives its name from its presence in Manx waters. The Calf of Man also has a large colony of seals which live and breed on the rocky coastline.

All content from Kiddle encyclopedia articles (including the article images and facts) can be freely used under Attribution-ShareAlike license, unless stated otherwise. Cite this article:
Calf of Man Facts for Kids. Kiddle Encyclopedia.