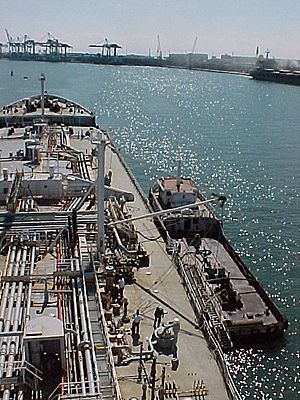 Fuel oil is a fraction obtained from petroleum distillation, either as a distillate or a residue at the oil refinery.

Broadly speaking, fuel oil is any liquid petroleum product that is burned in a furnace or boiler for the generation of heat or used in an engine for the generation of power, except oils having a flash point of approximately +40 °C and oils burned in cotton or wool-wick burners. In this sense, diesel is a type of fuel oil. Fuel oil is made of long hydrocarbon chains, particularly alkanes, cycloalkanes and aromatics. The term fuel oil is also used in a stricter sense to refer only to the heaviest commercial fuel that can be obtained from crude oil, heavier than gasoline and naphtha.

Fuel oil in the United States is classified into six classes, according to its boiling temperature, composition and purpose. The boiling point, ranging from 175 to 600 °C, and carbon chain length, 20 to 70 atoms, of the fuel increases with number. Viscosity also increases with fuel oil number and the heaviest oil has to be heated to get it to flow. Price usually decreases as the fuel number increases.

All content from Kiddle encyclopedia articles (including the article images and facts) can be freely used under Attribution-ShareAlike license, unless stated otherwise. Cite this article:
Fuel oil Facts for Kids. Kiddle Encyclopedia.