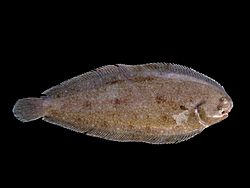 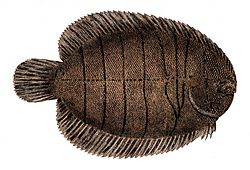 Sole is a flatfish belonging to several families. Generally speaking, they are members of the family Soleidae.

Outside Europe, the name sole is also given to various other similar flatfish, especially other members of the sole suborder Soleoidei as well as members of the flounder family, the Pleuronectidae.

In European cookery, the common or Dover sole Solea solea, is often simply called the sole. It is the most widely available, and often thought to be the best.

All content from Kiddle encyclopedia articles (including the article images and facts) can be freely used under Attribution-ShareAlike license, unless stated otherwise. Cite this article:
Sole (fish) Facts for Kids. Kiddle Encyclopedia.