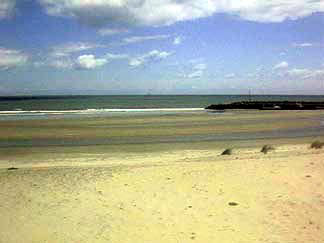 Carnsore Point (Carn tSóir or Ceann an Chairn in Irish) is a headland in the very South East corner of County Wexford, Ireland. This headland is Ireland's southern limit point of the Irish Sea, on the western side of St George's Channel.

It is famous for being the proposed location of the Nuclear Energy Board power plant which was to be built in the 1970s. The plan would have produced electricity for the Electricity Supply Board.

Originating in 1968, the Irish Government gave renewed effort to the plans after the 1973 energy crisis. The plan envisaged one, and eventually four, nuclear power stations, but was (discreetly) dropped in the late 1970s after opposition by environmental groups, including the Wexford group the Nuclear Safety Association and others. The campaign against the proposed plant also gained some international support, including that of Petra Kelly, who gave a speech at Carnsore. One activist against the plant who later became notable was Adi Roche. Roche focused on the relief of suffering experienced by children in the wake of the 1986 Chernobyl nuclear disaster, and founded Chernobyl Children International.

The anti-nuclear groups organised a series of rallies and concerts at Carnsore Point from 1978 (18–20 August) to August 1981. Titled "Get to the Point" and "Back to the Point" respectively, and featuring Christy Moore as lead act, the concerts were a massive success and served to bring to public notice the whole question of nuclear power in Ireland. The British and Irish Communist Organisation, who believed nuclear power was necessary to achieve socialism in Ireland, picketed the first concert.

All content from Kiddle encyclopedia articles (including the article images and facts) can be freely used under Attribution-ShareAlike license, unless stated otherwise. Cite this article:
Carnsore Point Facts for Kids. Kiddle Encyclopedia.