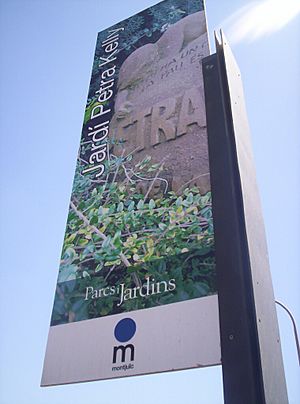 Petra Karin Kelly (November 23, 1947 – October 1, 1992) was a German politician, peace activist and one of the founders of the Green Party of Germany.

Kelly was born in Günzburg. Her stepfather was a US officer. Her original father and her mother were German. Her family moved to the US in 1959. She went to school in both countries. From 1966 to 1970 he studied political sciences in Washington, D.C.. Kelly campaigned for Robert F. Kennedy in the 1968 U.S. elections. She admired Martin Luther King and was an anti-Vietnam War protester. She graduated in 1970 in Washington and got another exam in 1971 in Amsterdam. Then she returned to West Germany. She worked for the European Commission in Brussels from 1971 to 1983.

She was one of the founders of the Green Party in Germany in 1979 – the first Green Party worldwide. From 1983 to 1990 she was a member of the Bundestag for the Greens. Kelly received the Right Livelihood Award in 1982.

All content from Kiddle encyclopedia articles (including the article images and facts) can be freely used under Attribution-ShareAlike license, unless stated otherwise. Cite this article:
Petra Kelly Facts for Kids. Kiddle Encyclopedia.