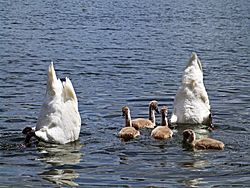 The mute swan (Cygnus olor) is a species of swan, and thus a member of the duck, goose and swan family Anatidae. It is native to much of Europe and Asia, and (as a rare winter visitor) the far north of Africa. It is also an introduced species in North America, Australasia and southern Africa.

Measuring 125 to 170 centimetres (49 to 67 in) in length, this large swan is wholly white in plumage with an orange bill bordered with black. It is recognisable by its pronounced knob atop the bill.

When swimming, the mute swan holds its neck in a graceful "S" curve with its bill pointing downward. The whooper swans usually carry their bill level with their neck erect. The male frequently arches his secondary wing feathers over his back in an aggressive display posture. 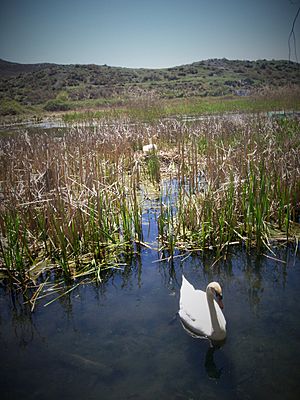 Nest in Drilon, Albania. The cob (male) is patrolling the area close to the nest to protect his mate.

Mute swans nest on large mounds that they build with waterside vegetation in shallow water on islands in the middle or at the very edge of a lake. They are monogamous and often reuse the same nest each year, restoring or rebuilding it as needed. Male and female swans share the care of the nest, and once the cygnets are fledged it is not uncommon to see whole families looking for food.They feed on a wide range of vegetation, both submerged aquatic plants which they reach with their long necks, and by grazing on land. The food commonly includes agricultural crop plants such as oilseed rape and wheat, and feeding flocks in the winter may cause significant crop damage, often as much through trampling with their large webbed feet, as through direct consumption.

Unlike black swans, mute swans are usually strongly territorial with just a single pair on smaller lakes, though in a few locations where a large area of suitable feeding habitat is found they can be colonial. The largest colonies have over 100 pairs, such as at the colony at Abbotsbury Swannery in southern England, and at the southern tip of Öland Island, Ottenby Preserve, in the coastal waters of the Baltic Sea, and can have nests spaced as little as 2 m (7 ft) apart. Non-mated juveniles up to 3–4 years old commonly form larger flocks, which can total several hundred birds, often at regular traditional sites. A notable flock of non-breeding birds is found on the River Tweed estuary at Berwick-upon-Tweed in northeastern England, with a maximum count of 787 birds. A large population exists near the Swan Lifeline Station in Windsor, and live on the Thames in the shadow of Windsor Castle. Once the adults are mated they seek out their own territories and often live close to ducks and gulls, which may take advantage of the swan's ability to reach deep water weeds, which tend to spread out on the water surface.

The mute swan is less vocal than the noisy whooper and Bewick's swans; they do, however, make a variety of grunting, hoarse whistling, and snorting noises, especially in communicating with their cygnets, and usually hiss at competitors or intruders trying to enter their territory. The most familiar sound associated with mute swan is the vibrant throbbing of the wings in flight which is unique to the species, and can be heard from a range of 1 to 2 km (0.6 to 1 mi), indicating its value as a contact sound between birds in flight. Cygnets are especially vocal, and communicate through a variety of whistling and chirping sounds when content, as well as a harsh squawking noise when distressed or lost. 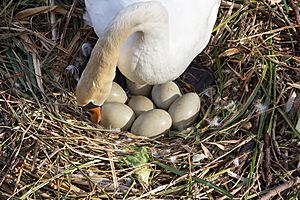 Mute swans can be very aggressive in defence of their nests and are highly protective of their mate and offspring. Most defensive attacks from a mute swan begin with a loud hiss and, if this is not sufficient to drive off the predator, are followed by a physical attack. Swans attack by smashing at their enemy with bony spurs in the wings, accompanied by biting with their large bill, while smaller waterbirds such as ducks are normally grabbed with the swan's bill and dragged or thrown clear of the swan and its offspring. The wings of the swan are very powerful, though not strong enough to break an adult man's leg, as said anecdotally. Large waterfowl, such as Canada geese, (more likely out of competition than in response to potential predation) may be aggressively driven off, and mute swans regularly attack people who enter their territory. The cob is responsible for defending the cygnets while on the water, and will sometimes attack small watercraft, such as canoes, that it feels are a threat to its young. The cob will additionally try and chase the predator out of his family territory, and will keep animals such as foxes and raptors at bay. In New York (outside its native range), the most common predators of cygnets are common snapping turtles. Healthy adults are rarely preyed upon, though canids such as coyotes, felids such as lynxes, and bears can pose a threat to infirm ones (healthy adults can usually swim away from danger unless defending nests) and there are a few cases of healthy adults falling prey to golden eagles. In England, there has been an increased rate of attacks on swans by out-of-control dogs, especially in parks where the birds are less territorial. This is considered criminal in British law, and the birds are placed under the highest protection due to their association with the Monarch.

The familiar pose with neck curved back and wings half raised, known as busking, is a threat display. Both feet are paddled in unison during this display, resulting in more jerky movement. The swans may also use the busking posture for wind-assisted transportation over several hundred meters, so-called windsurfing. 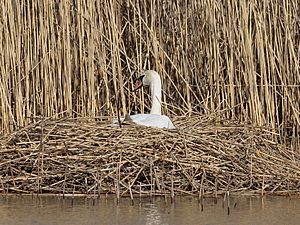 Nest of Mute swan in Sweden

Mute swans lay from four to ten eggs, and the female broods for around 36 days. The cygnets do not reach the ability of flight before an age of 120 to 150 days: this limits the distribution of the species in the northern edge of its range, as the cygnets must learn to fly before the waters freeze.

The mute swan is found naturally mainly in temperate areas of Europe across western Asia, as far east as the Russian Maritimes, near Sidemi.

It is partially migratory throughout northern latitudes in Europe and Asia, as far south as north Africa and the Mediterranean. It is known and recorded to have nested in Iceland and is a vagrant to that area, as well as to Bermuda, according to the UN Environment Programme chart of international status chart of bird species, which places it in 70 countries, breeding in 49 countries, and vagrant in 16 countries. While most of the current population in Japan is introduced, mute swans are depicted on scrolls more than a thousand years old, and wild birds from the mainland Asian population still occur rarely in winter. Natural migrants to Japan usually occur along with whooper and sometimes Bewick's swans.

The mute swan is protected in most of its range, but this has not prevented illegal hunting and poaching. It is often kept in captivity outside its natural range, as a decoration for parks and ponds, and escapes have happened. The descendants of such birds have become naturalised in the eastern United States and Great Lakes, much as the Canada goose has done in Europe. 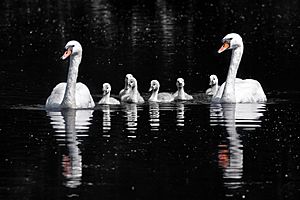 Mute swans with cygnets in Oxfordshire 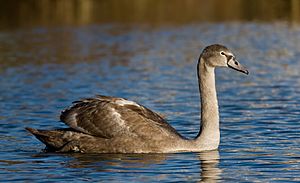 The total native population of mute swans is about 500,000 birds at the end of the breeding season (adults plus young), of which 350,000 are in the former Soviet Union. The largest single breeding concentration is 11,000 pairs in the Volga Delta.

For many centuries, mute swans in Britain were domesticated for food, with individuals being marked by nicks on their webs (feet) or beaks to indicate ownership. These marks were registered with the Crown and a Royal Swanherd was appointed. Any birds not so marked became Crown property, hence the swan becoming known as the "Royal Bird". It is quite possible that this domestication saved the swan from being hunted to extinction in Britain.

Populations in western Europe were largely exterminated by hunting pressure in the 13th–19th centuries, with the exception of semi-domesticated birds maintained as poultry by large landowners. Better protection in the late 19th and early 20th centuries allowed birds to return to most or all of their former range. More recently in the period from about 1960 up to the early 1980s, numbers declined significantly again in many areas in England, primarily due to lead poisoning from birds swallowing discarded fishing sinkers made from lead. After lead weights were replaced by other less toxic alternatives, mute swan numbers increased again rapidly.

Since being introduced into North America, the mute swan has increased greatly in number, to the extent that it is considered as an invasive species. Populations introduced into other areas remain small, with around 200 in Japan, fewer than 200 in New Zealand and Australia, and about 120 in South Africa.

The mute swan was introduced to North America in the late 19th century. Recently, it has been widely viewed as an invasive species because of its rapidly increasing numbers and its adverse effects on other waterfowl and native ecosystems. For example, a study of population sizes in the lower Great Lakes from 1971 to 2000 found that mute swan numbers were increasing at an average rate of at least 10% per year, doubling the population every seven to eight years. Several studies have concluded that mute swans severely reduce densities of submerged vegetation where they occur.

The mute swan had absolute protection in New Zealand under the Wildlife Act 1953 but this was changed in June 2010 to a lower level of protection. It still has protection, but is now allowed to be killed or held in captivity at the discretion of the Minister of Conservation.

A small feral population exists in the vicinity of Perth, Australia, however is believed to number less than 100 individuals. 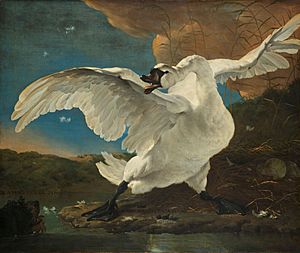 A mute swan was shown on the 2004 commemorative Irish Euro coin to mark the accession of the 10 new member states which occurred during the Irish Presidency of the European Union.

The mute swan has been the national bird of Denmark since 1984. Prior to that, the skylark was considered Denmark's national bird (since 1960).

The fairy tale "The Ugly Duckling" by Hans Christian Andersen tells the story of a cygnet ostracised by his fellow barnyard fowl because of his perceived homeliness. To his delight (and to the surprise of others), he matures into a graceful swan, the most beautiful bird of all.

In the famous ballet Swan Lake, the main character, Princess Odette and her companions are turned into swans by a wicked spell.

Today, the British Monarch retains the right to ownership of all unmarked mute swans in open water, but Queen Elizabeth II only exercises her ownership on certain stretches of the Thames and its surrounding tributaries. This ownership is shared with the Vintners' and Dyers' Companies, who were granted rights of ownership by the Crown in the 15th century.

The mute swans in the moat at the Bishops Palace at Wells Cathedral in Wells, England have for centuries been trained to ring bells via strings attached to them to beg for food. Two swans are still able to ring for lunch.

The pair of swans in the Boston Public Garden are named Romeo and Juliet after the Shakespearean couple; however, it was found that both are female.

All content from Kiddle encyclopedia articles (including the article images and facts) can be freely used under Attribution-ShareAlike license, unless stated otherwise. Cite this article:
Mute swan Facts for Kids. Kiddle Encyclopedia.