Rapeseed (B. napus subsp. napus), also known as rape, oilseed rape, and, in the case of one particular group of cultivars, canola, is a bright-yellow flowering member of the family Brassicaceae (mustard or cabbage family), cultivated mainly for its oil-rich seed. It is the third-largest source of vegetable oil and second-largest source of protein meal in the world.

The term "rape" derives from the Latin word for turnip, rapa or rapum, cognate with the Greek word hrapys.

The species Brassica napus belongs to the flowering plant family Brassicaceae. Rapeseed is a subspecies with the autonym B. napus subsp. napus. It encompasses winter and spring oilseed, vegetable and fodder rape. Siberian kale is a distinct leaf rape form variety (B. napus var. pabularia) which used to be common as a winter-annual vegetable. The second subspecies of B. napus is B. napus subsp. rapifera (also subsp. napobrassica; the rutabaga, swede, or yellow turnip). 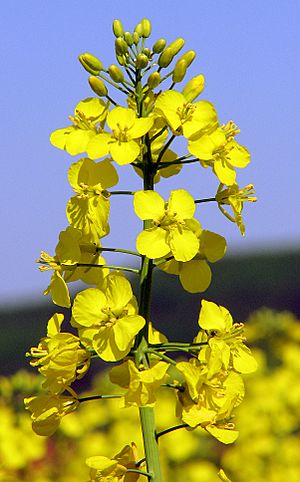 Rapeseed flowers are yellow and about 17 mm (0.67 in) across. They are radial and consist of four petals in a typical cross-form, alternating with four sepals. They have indeterminate racemose flowering starting at the lowest bud and growing upward in the following days. The flowers have two lateral stamens with short filaments, and four median stamens with longer filaments whose anthers split away from the flower's center upon flowering.

The rapeseed pods are green and elongated siliquae during development that eventually ripen to brown. Each pod has two compartments separated by a inner central wall within which a row of oilseeds develop. The oilseeds are black and hard at maturity.

In Northern Ireland, U K B. napus and B. rapa are recorded as escapes in roadside verges and waste ground. 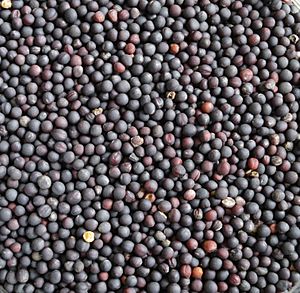 Processing of rapeseed for oil production produces rapeseed meal as a byproduct. The byproduct is a high-protein animal feed, competitive with soybean. The feed is employed mostly for cattle feeding, but is also used for pigs and poultry. However, natural rapeseed oil contains 50% erucic acid and high levels of glucosinolates that significantly lowers the nutritional value of rapeseed press cakes for animal feed.

Rapeseed oil is one of the oldest known vegetable oils, but historically was used in limited quantities due to high levels of erucic acid, which is damaging to cardiac muscle of animals, and glucosinolates, which made it less nutritious in animal feed. Rapeseed oil can contain up to 54% erucic acid. Food-grade canola oil derived from rapeseed cultivars, also known as rapeseed 00 oil, low erucic acid rapeseed oil, LEAR oil, and rapeseed canola-equivalent oil, has been generally recognized as safe by the United States Food and Drug Administration. Canola oil is limited by government regulation to a maximum of 2% erucic acid by weight in the USA and 5% in the EU, with special regulations for infant food. These low levels of erucic acid are not believed to cause harm in human infants.

Rapeseed oil is used as diesel fuel, either as biodiesel, straight in heated fuel systems, or blended with petroleum distillates for powering motor vehicles. Biodiesel may be used in pure form in newer engines without engine damage and is frequently combined with fossil-fuel diesel in ratios varying from 2% to 20% biodiesel. Owing to the costs of growing, crushing, and refining rapeseed biodiesel, rapeseed-derived biodiesel from new oil costs more to produce than standard diesel fuel, so diesel fuels are commonly made from the used oil. Rapeseed oil is the preferred oil stock for biodiesel production in most of Europe, accounting for about 80% of the feedstock, partly because rapeseed produces more oil per unit of land area compared to other oil sources, such as soybeans, but primarily because canola oil has a significantly lower gel point than most other vegetable oils. 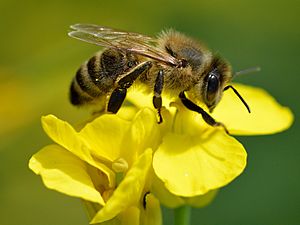 Rapeseed is also used as a cover crop in the US during the winter as it prevents soil erosion, produces large amounts of biomass, suppresses weeds and can improve soil tilth with its root system. Some cultivars of rapeseed are also used as annual forage and are ready for grazing livestock 80 to 90 days after planting.

Rapeseed has a high melliferous potential and is a main forage crop for honeybees. Monofloral rapeseed honey has a whitish or milky yellow color, peppery taste and, due to its fast crystallization time, a soft-solid texture. It crystallizes within 3 to 4 weeks and can ferment over time if stored improperly. The low fructose-to-glucose ratio in monofloral rapeseed honey causes it to quickly granulate in the honeycomb, forcing beekeepers to extract the honey within 24 hours of it being capped.

As a biolubricant, rapeseed has possible uses for bio-medical applications (e.g., lubricants for artificial joints). Biolubricant containing 70% or more canola/rapeseed oil has replaced petroleum-based chainsaw oil in Austria although they are typically more expensive.

Rapeseed has been researched as a means of containing radionuclides that contaminated the soil after the Chernobyl disaster as it has a rate of uptake up to three times more than other grains, and only about 3 to 6% of the radionuclides go into the oilseeds.

Rapeseed meal is mostly used as a soil fertilizer rather than for animal feed in China. 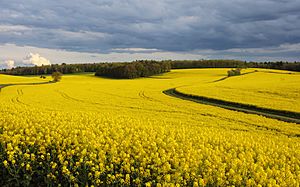 Crops from the genus Brassica, including rapeseed, were among the earliest plants to be widely cultivated by mankind as early as 10,000 years ago. Rapeseed was being cultivated in India as early as 4000 B.C. and it spread to China and Japan 2000 years ago.

Oilseed rape is predominantly cultivated in its winter form in most of Europe and Asia due to the requirement of vernalization to start the process of flowering. It is sown in autumn and remains in a leaf rosette on the soil surface during the winter. The plant grows a long vertical stem in the next spring followed by lateral branch development. It generally flowers in late spring with the process of pod development and ripening occurring over a period of 6–8 weeks until midsummer.

In Europe, winter rape is grown as a annual break crop in three to four year rotations with cereals such as wheat and barley, and break crops such as peas and beans. This is done to reduce the possibility of pests and diseases being carried over from one crop to another. Winter rape is less susceptible to crop failure as it is more vigorous than the summer variety and can compensate for damage done by pests.

Spring rapeseed is cultivated in Canada, northern Europe and Australia as it is not winter-hardy and does not require vernalization. The crop is sown in spring with stem development happening immediately after germination.

Rapeseed can be cultivated on a wide variety of well-drained soils, prefers a pH between 5.5 and 8.3 and has a moderate tolerance of soil salinity. It is predominantly a wind-pollinated plant but shows significantly increased grain yields when bee-pollinated, almost double the final yield but the effect is cultivar-dependent. It is currently grown with high levels of nitrogen-containing fertilisers, and the manufacture of these generates N2O. An estimated 3-5% of nitrogen provided as fertilizer for rapeseed is converted to N2O.

The main diseases of the winter rapeseed crop are canker, light leaf spot, alternaria and sclerotinia stem rot. Canker causes leaf spotting, and premature ripening and weakening of the stem during the autumn-winter period. A conazole or triazole fungicide treatment is required in late autumn and in spring against canker while broad-spectrum fungicides are used during the spring-summer period for alternaria and sclerotinia control. Oilseed rape cannot be planted in close rotation with itself due to soil-borne diseases such as sclerotinia, verticillium wilt and clubroot.

Oilseed rape is attacked by a wide variety of insects, nematodes, slugs as well as wood pigeons. The brassica pod midge, cabbage seed weevil, cabbage stem weevil, cabbage stem flea beetle, rape stem weevil and pollen beetles are the primary insect pests that prey on the oilseed rape crop in Europe. The insect pests can feed on developing pods to lay eggs inside and eat the developing seeds, bore into the plant's stem and feed on pollen, leaves and flowers. Synthetic pyrethroid insecticides are the main attack vector against insect pests though there is a large-scale use of prophylactic insecticides in many countries. Molluscicide pellets are used either before or after sowing of the rapeseed crop to protect against slugs.

History of the cultivars

Canola was originally a trademark, but is now a generic term in North America for edible varieties of rapeseed oil. In Canada, an official definition of canola is codified in Canadian law.

Following the European Parliament's Transport Biofuels Directive in 2003 promoting the use of biofuels, the cultivation of winter rapeseed increased dramatically in Europe.

Bayer Cropscience (in collaboration with BGI-Shenzhen, China, Keygene N.V., the Netherlands, and the University of Queensland, Australia) announced it had sequenced the entire genome of B. napus and its constituent genomes present in B. rapa and B. oleracea in 2009. The "A" genome component of the amphidiploid rapeseed species B. napus is currently being sequenced by the Multinational Brassica Genome Project.

A genetically modified-for-glyphosate-tolerance variety of rapeseed which was developed in 1998 is considered to be the most disease- and drought-resistant canola. By 2009, 90% of the rapeseed crops planted in Canada were of this sort, adoption of which, however, has not been free of controversy.

The Food and Agriculture Organization reports global production of 36 million tons of rapeseed in the 2003–2004 season, and an estimated 58.4 million tons in the 2010–2011 season.

Worldwide production of rapeseed (including canola) has increased sixfold between 1975 and 2007. The production of canola and rapeseed since 1975 has opened up the edible oil market for rapeseed oil. Since 2002, production of biodiesel has been steadily increasing in EU and USA to 6 million metric tons in 2006. Rapeseed oil is positioned to supply a good portion of the vegetable oils needed to produce that fuel. World production was thus expected to trend further upward between 2005 and 2015 as biodiesel content requirements in Europe go into effect.

All content from Kiddle encyclopedia articles (including the article images and facts) can be freely used under Attribution-ShareAlike license, unless stated otherwise. Cite this article:
Rapeseed Facts for Kids. Kiddle Encyclopedia.