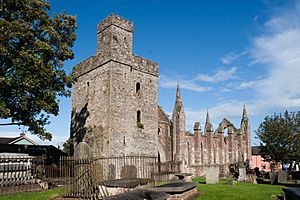 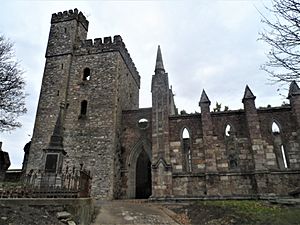 View of the south wall 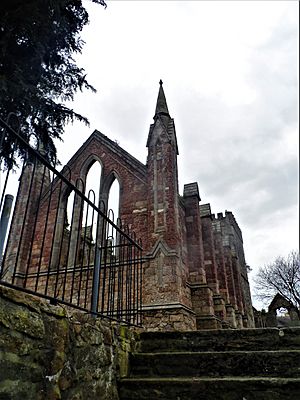 Selskar Abbey is a ruined twelfth-century abbey in the town of Wexford, Ireland. It was an Augustinian house of canons, whose proper name was the Priory of St. Peter and St. Paul.

The name is derived from Old Norse selr-skar, "seal skerry."

It is claimed that originally a Viking temple to Odin stood on the site.

There was an earlier church on the site: it was here in 1169 that Diarmait Mac Murchada signed the first Anglo-Irish peace treaty. The leading Norman commander Raymond FitzGerald, (nicknamed Le Gros ) and his wife Basila de Clare, sister of Richard de Clare, 2nd Earl of Pembroke, (nicknamed Strongbow), are said to have been married at Selskar in 1174.

There is a long-standing tradition that Henry II spent Lent of 1172 at Selskar Abbey, where he did penance for the murder of Thomas Becket. It is unclear if there is any truth in the story, although Henry was in Ireland at the time, and Becket's murder, some fifteen months earlier, was still a subject of great controversy, so that Henry might well have felt that Selskar was the right place to make an appropriate gesture of penance.

The surviving ruins are of the abbey which was founded about 1190 by Alexander de la Roche, ancestor of the Roche family who hold the title Baron Fermoy. The abbey was built with Dundry stone and dressed granite.

We have a glimpse of everyday life in the abbey through a letter which John Topcliffe, Lord Chief Justice of Ireland addressed to Henry VIII in about 1512. He complained that the monks who "time out of mind" had chosen their own Prior, had elected a "good blessed religious man" as Prior but that the Abbot had turned him out. It is unclear why the Chief Justice, who was an Englishman without any obvious ties to Wexford, was so concerned about the affair, nor why he thought the King would be interested. The King's reply, if any, is not recorded. 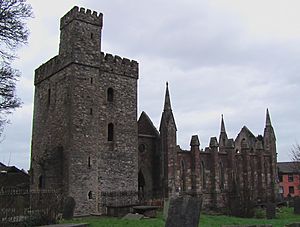 The Abbey was suppressed in 1542 and given to John Parker, the Master of the Rolls in Ireland. It later passed to the Stafford family. The Abbey was reportedly sacked by Oliver Cromwell's troops in 1649.

Selskar Abbey is now part of the Westgate Heritage Tower; it reopened to the public in July 2012.

All content from Kiddle encyclopedia articles (including the article images and facts) can be freely used under Attribution-ShareAlike license, unless stated otherwise. Cite this article:
Selskar Abbey Facts for Kids. Kiddle Encyclopedia.