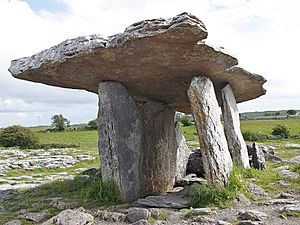 A dolmen is a type of single-chamber megalithic tomb. It usually consists of three or more upright stones (megaliths) supporting a large flat horizontal capstone (table).

Most date from the early Neolithic period (4000 BC to 3000 BC). Dolmens were usually covered with earth or smaller stones to form a barrow, though in many cases that covering has weathered away, leaving only the stone "skeleton" of the burial mound intact.

It remains unclear when, why, and by whom the earliest dolmens were made. The oldest known dolmens are in Western Europe, where they were set in place around 7,000 years ago. Archaeologists still do not know who erected these dolmens, which makes it difficult to know why they did it. They are generally all regarded as tombs or burial chambers, despite the absence of clear evidence for this. Human remains, sometimes accompanied by artefacts, have been found in or close to the dolmens which could be scientifically dated using radiocarbon dating. However, it has been impossible to prove that these remains date from the time when the stones were originally set in place.

All content from Kiddle encyclopedia articles (including the article images and facts) can be freely used under Attribution-ShareAlike license, unless stated otherwise. Cite this article:
Dolmen Facts for Kids. Kiddle Encyclopedia.