Apulia (Italian: Puglia; Albanian: Pulia; Ancient Greek: Ἀπουλία) is one of the twenty regions of Italy, in southern Italy on the Adriatic Sea. The capital is Bari.

Its southernmost portion, known as Salento peninsula, has the shape of a high heel on the "boot" of Italy.

The region is bordered by Molise to the northwest, Campania to the west, Basilicata to the southwest, the Strait of Otranto and the Ionian Sea to the southeast, the Gulf of Taranto to the south, and the Adriatic Sea to north and to the east.

The region is divided into six provinces: 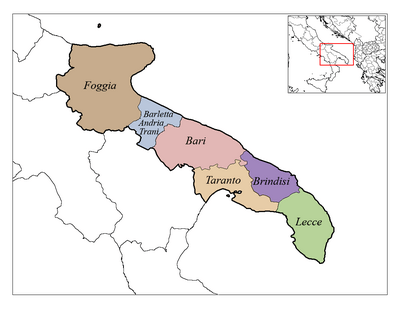 All content from Kiddle encyclopedia articles (including the article images and facts) can be freely used under Attribution-ShareAlike license, unless stated otherwise. Cite this article:
Apulia Facts for Kids. Kiddle Encyclopedia.