Province of Foggia facts for kids

The Province of Foggia is a province in the Apulia (Puglia) region of southern Italy.

This province is also known as Daunia (after Daunians, a Iapygian pre-Roman tribe living in the territory) or else Capitanata, originally Catapanata, because during the Middle Ages it was governed by a catepan, as part of the Catepanate of Italy. Its capital is the city of Foggia.

The province of Foggia can be divided in three parts: one centered in its capital Foggia called Tavoliere, another sided along the Apennines named Daunian Mountains and the third one representing the spur of the boot-shaped Italian peninsula called Gargano.

The Tavoliere is an important agricultural area: grapefruit, olives, durum wheat and tomato are the chief products. It is also called "the granary of Italy" because of its important production of wheat.

Daunian Mountains lie along the border with Molise and Campania. Scattered with small villages only, the mountains are mostly covered by forests and pastures, with the main produce being hams and caciocavallo cheese. Faetar, a francoproveçal dialect, is spoken in two villages: Faeto and Celle di San Vito.

The Gargano is a peninsula partly mountainous and partly covered by a forest, Foresta Umbra with vegetation typical of Central Europe, the only lasting part in Italy of the ancient Black Forest. AllegedlyTemplate:Weasel-word its name comes from the word ombra (shadow) because of its thickness that prevents the light to enter in contrast with the typical flora. The coast of Gargano is rich in beaches and touristic facilities. In the north are two major salt lakes Lesina and Varano. It is also important for the production of olives, olive oil and both mountain and sea typical food products. 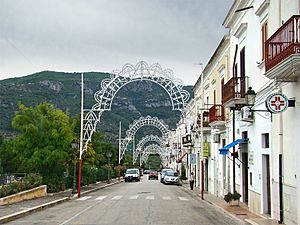 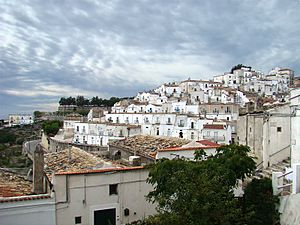 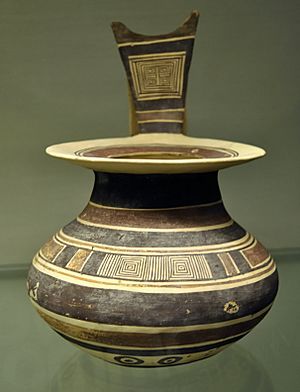 Main centers in the province are:

Other centers of interest are:

Although less important than once before, the agricultural sector remains the mainstay of Foggia's economy, so much that its area is nicknamed the "granary of Italy". The few industries present are mostly devoted to food processing.

Almost every peeled tomato in Europe comes from the province of Foggia in southern Italy. Every year, two million tons of tomatoes are produced but the farmers get only eight cents per kilo. In order to survive in the free market economy most tomatoes-farmers recruit illegal immigrants.

Foggia receives many Catholic pilgrims each year to locations such as the Sanctuary of Saint Michael the Archangel in Monte Sant'Angelo which was visited by Pope John Paul II in 1987 and to nearby San Giovanni Rotondo the home of Saint Pio of Pietrelcina from 1916 until his death in 1968.

All content from Kiddle encyclopedia articles (including the article images and facts) can be freely used under Attribution-ShareAlike license, unless stated otherwise. Cite this article:
Province of Foggia Facts for Kids. Kiddle Encyclopedia.