Province of Lecce facts for kids 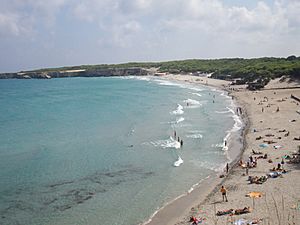 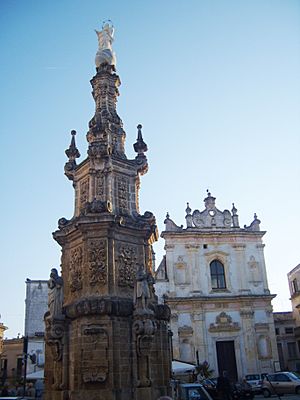 The province occupies an area of 2,799.07 square kilometres (1,080.73 sq mi) and has a total population of 802,807 (2016). There are 97 comunes (Italian: comuni) in the province. It is surrounded by the provinces Taranto and Brindsi in the northwest, the Ionian Sea in the west, and the Adriatic Sea in the east. This location has established it as a popular tourist destination. It has been ruled by the Romans, Byzantine Greeks, Carolingians, Lombards, Arabs, and Normans. The important towns are Lecce, Gallipoli, Nardò, Maglie, and Otranto. Its important agricultural products are wheat and corn.

The province of Lecce has its origins in the ancient Giustizierato, known then as the Province of Terra d'Otranto. Since the eleventh century the Terra d'Otranto included the territories of the provinces of Lecce, Taranto and Brindisi, with the exception of Fasano and Cisternino. During this time Lecce was severely affected by poverty despite the production of olive oil. People from Lecce migrated to the Province of Bari, where they worked in the wine industry. Up to 1663, the Province of Terra d'Otranto also included the territory of Matera (Basilicata). Its first capital was Otranto but in the Norman period (twelfth century), Lecce city was made the capital. After the unification of Italy, the name Terra d'Otranto was changed to Province of Lecce and its territory was divided into the four districts; Lecce, Gallipoli, Brindisi and Taranto. Its break-up began in 1923 when the district of Taranto was transformed into the new province of the Ionian.

After the first world war economic conditions worsened and unemployment peaked. These factors, coupled with the negligence of the weak government, prompted farm workers to revolt against their employers. Farm owners were captured and paraded in public places. During the medieval era, Muslim slaves were transported from the province's ports and the practice of keeping slaves was common. Lecce stone extracted from the province has been used to decorate several historical monuments and is widely used for interior decoration.

The San Cataldo Nature Reserve [it] is located in the province. It is a 28 hectares (69 acres) protected area that was set up in 1977 along the Adriatic coast near Leccce. The Reserve is home to a large number of animals such as foxes, hedgehogs, badgers, weasels, reptiles and birds. A variety of Mediterranean plants species is also found here. Lakes Alimini Grande and Alimini Piccolo are also located in the province. Lake Alimini Grande is surrounded by a rocky area covered with pine woods and Mediterranean vegetation; also, its depth does not exceed four meters, and the water is rich with shellfish. Lake Alimini Piccolo is found further inland and consists of freshwater; this water comes from the groundwater channel of the Rio Grande. Alimini Piccolo's depth does not exceed half a meter.

All content from Kiddle encyclopedia articles (including the article images and facts) can be freely used under Attribution-ShareAlike license, unless stated otherwise. Cite this article:
Province of Lecce Facts for Kids. Kiddle Encyclopedia.