Province of Barletta-Andria-Trani facts for kids 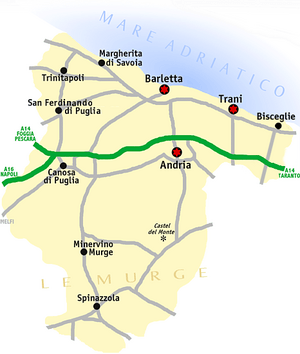 The main river of the province, and of the Apulia region, is the Ofanto river, that flows into the Adriatic Sea between Margherita di Savoia and Barletta.

The highest point in the province is Monte Caccia, 679 m (2,228 ft) high; it is in the Altopiano delle Murge, a karstic plateau of rectangular shape in southern Italy.

The province has 10 comuni.

All content from Kiddle encyclopedia articles (including the article images and facts) can be freely used under Attribution-ShareAlike license, unless stated otherwise. Cite this article:
Province of Barletta-Andria-Trani Facts for Kids. Kiddle Encyclopedia.