Tramore ( Irish: Trá Mhór, meaning big strand/beach) is a seaside town in County Waterford on the southeast coast of Ireland. A small fishing village until the arrival of the railway in 1853, the town has continually expanded since. Initially the town flourished as a tourist destination and latterly it has developed as a seaside satellite town of Waterford City, which is 13 km to the north. Waterford Airport is located about 6 km northeast.

The town is situated on the north-western corner of Tramore Bay on a hill that slopes down to the strand, or sand spit, that divides the bay. Behind the spit lies the tidal lagoon known as the Back Strand. Tramore has an imposing Gothic Revival Catholic Church (which is dominated by an asymmetrical tower and spire), on a monumental site overlooking the town, built 1856–1871 by J. J. McCarthy.

Before the late 18th century, the town was a small fishing hamlet. Thereafter its potential was realised as ‘a pleasant retreat for the citizens of Waterford and others who assembled there for the benefit of the salt water’. A tourism boom has left a legacy of buildings dating from the 1860s such as the terraced housing on Strand Street. Opened in 1853, a 12 km (7 mi) long railway line ran from Waterford's Railway Square to the terminus in Tramore. It was unique in that it was not connected to any other line. Tramore railway station opened on 5 September 1853 and finally closed on 1 January 1961.

On 30 January 1816, the Sea Horse, a military transport ship, with the 2nd battalion of the 59th Regiment of Foot, was wrecked in Tramore Bay, and 292 men and 71 women and children perished. Some time later the Sea Horse was adopted as the symbol of the town of Tramore, and was later adopted as the logo for Waterford Crystal in 1955. From the sea, the treacherous Tramore bay looks like the traditional safe haven of Waterford estuary. After the event Lloyd's of London funded the building of piers, including the erection of Metal Man to prevent similar calamities. A monument to the incident is located on Doneraile Walk and an Obelisk marks a burial plot at the Church of Ireland on Church Road. An account of this tragedy by one of its few survivors as related to James Acland can be read here 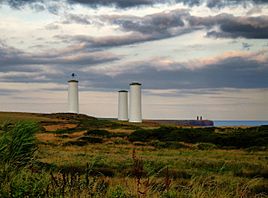 The "Metal Man" statue is visible in the distance.

A prominent feature of Tramore bay is the "Metal Man". It is a large cast-metal figure pointing seawards, set on top of one of three pillars located in Westown. It was erected in 1823 by Lloyd's of London to warn seafarers away from dangerous shallow waters. Two more pillars sit on the headland opposite, Brownstown Head. There are many myths and legends surrounding the Metal Man. One such myth is that if a woman could hop barefoot around the base of the Metal Man three times she would be married within the year. In 2006 the Irish broadcaster RTÉ had an item on its Seascapes radio programme on the history of the Metal Man and its state of repairs.

On the night of 6 June 1921, during the Irish War of Independence, fifty local IRA Volunteers attempted to ambush a party of forty British troops from Waterford City, who were coming to Tramore following an attack on the RIC barracks there. The ambush took place at Pickardstown, about a mile to the north of Tramore. The ambush failed to go according to plan as they could not see in the dark field.This caused the death of two IRA men and two wounded. The Tramore GAA field is named after one of the dead Volunteers. 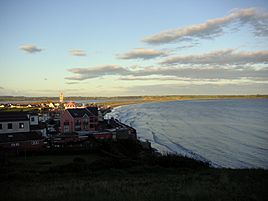 The Strand in Tramore

The town has long been associated with Irish tourists and offered a traditional seaside experience of ice-cream, fairground and sand. The beach front features a long promenade and an amusement park. It is a popular resort for tourists in the summer and has 5 km (3 mi) of beach and sand dunes looking out onto the Atlantic Ocean.There are many accommodations for tourist, including hotels, apartments,homes and caravan sites. Tramore has a reputation for surfing, and the T-Bay Surf club, which was established in 1967, has produced national and international surfing champions.

The Promenade, erected in 1914, serves as a popular tourist spot in Tramore and is the focus of the attractions of the strand during the summer. The Cliff Road was built in 1872 as a carriageway on the site of an old Coastguard path and provides access to Newtown Head and the men's swimming club.

Tramore has a long association with Horse Racing. Soon after the railway arrived, Lord Doneraile and James Delahunty built a new racecourse at Riverstown. Racing continued here until 1911, when the area finally succumbed to the sea, and, at low tide, one can still see part of the racecourse from the back strand.

A new Tramore racecourse was built at Graun Hill, where it currently operates. The town is known for a horse-racing festival that has been held every August for more than 200 years. While the horses used to run along the strand, the route has moved to a purpose-built race course. Over recent years the course has been developed and improved and is regularly used as a venue for shows and music events. Trá Fest, a street music festival held in mid summer has become a popular event over the last few years and showcases local bands as well as national and international acts.

The scenic landscape of Tramore, represented by the strand and cliffs, attracts many walkers. Walks in the locality include the Doneraile Walk, Cliff Road Walk, as well as the 5 km Strand walk commonly called 'down the back and up the front'. Another attraction between March and September every year is the set up of "The Amusements" a small amusement park with a selection of rides and other attractions opposite the beach. Otherwise known as "down-around" by the locals

More recently Tramore has become renowned as a surfing location in Ireland, as well as other watersports including kitesurfing and windsurfing. The sport was first brought to the town in 1967 by Irish surfing pioneer Kevin Cavey. Tramore has many surf stores, board manufacturers, surf schools and hire shops in the town. There are many good breaks in and around Tramore. During big swell and wind locals also head to surf Killmurren Cove where there is some shelter and other breaks near-by often work when Tramore is blown out with big swell including Dunmore East, Bunmahon and Annestown.

All content from Kiddle encyclopedia articles (including the article images and facts) can be freely used under Attribution-ShareAlike license, unless stated otherwise. Cite this article:
Tramore Facts for Kids. Kiddle Encyclopedia.