Cathedral of the Most Holy Trinity, Waterford facts for kids 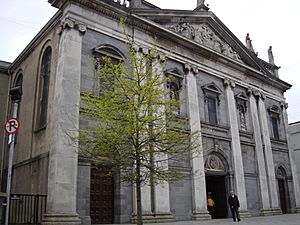 Cathedral of the Most Holy Trinity, Barronstrand Street, Waterford

The Cathedral of the Most Holy Trinity is the cathedral church of the Roman Catholic Diocese of Waterford and Lismore located in Barronstrand Street, Waterford City, Ireland.

The cathedral was designed by John Roberts (Waterford architect) in 1793 and has the distinction of being the oldest cathedral of the Roman Catholic Church in Ireland. A chapel had previously stood on the same ground, having been constructed there at the height of the Penal Laws on the request of the Roman Catholic community of Waterford.

In the early part of the twentieth century, railings separated the church from the street. These have since been removed. The Cathedral was refurbished in 1977 and a new altar was installed so that Mass could be celebrated ad populum (facing the people). A gift of ten crystal chandeliers from Waterford Crystal enhanced the glory of the Cathedral. A complete reflooring of the building and a restructuring of the sacristy took place in the early 1990s. Further work was completed in November 2006 with a re-fit of structure to the interior and exterior.

The cathedral's pipe organ was built around 1848 by William Hill & Sons and refurbished by the same firm in 1910. It was played for the very first time by organist W.T. Best on Sunday August 29, 1858. The organ was extensively altered by the Irish Organ Company in 1963. It has a manual compass of 61 notes and a pedal compass of 32 notes. The action is electro-pneumatic and the console is detached.

The present organist and musical director, Cecilia Kehoe, studied music at University College Cork (U.C.C.) and trained as an organist at St. Finbarre's Cathedral. After graduating from U.C.C., she continued her studies at Ann Arbor University in the U.S. state of Michigan, where she completed a master's degree in Church Music in 2001. Kehoe was appointed as organist for the Cathedral of the Most Holy Trinity in 2005 and also acts as musical director for the Cathedral Choir.

All content from Kiddle encyclopedia articles (including the article images and facts) can be freely used under Attribution-ShareAlike license, unless stated otherwise. Cite this article:
Cathedral of the Most Holy Trinity, Waterford Facts for Kids. Kiddle Encyclopedia.