Kids Encyclopedia Facts
For the cathedral of Roman Catholic diocese of Waterford and Lismore, see Cathedral of the Most Holy Trinity, Waterford. 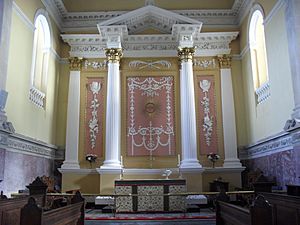 The altar, with the Tetragrammaton above.

The first church on the site was built in the 11th century. In 1170 it was the venue for the marriage of Richard de Clare, 2nd Earl of Pembroke ("Strongbow"), and Aoife Ní Diarmait. This was replaced in 1210 by a Gothic Cathedral. Since Christ Church Cathedral was subject to the Protestant Reformation, Roman Catholic adherents were consequently obliged to worship elsewhere.

In the 18th century, the city corporation recommended that the bishop erect a new building. The architect was John Roberts, who was responsible also for the Catholic cathedral and for much of Georgian Waterford.

During the demolition of the old cathedral, a series of medieval vestments were discovered in 1773. They were presented by the then Anglican bishop, the Rt Revd Richard Chenevix, to his Roman Catholic counterpart, the Most Revd Peter Creagh, and are now kept in the Museum of Treasures in Waterford and the National Museum in Dublin.

The present building has been described by architectural historian Mark Girouard as the finest 18th century ecclesiastical building in Ireland.

All content from Kiddle encyclopedia articles (including the article images and facts) can be freely used under Attribution-ShareAlike license, unless stated otherwise. Cite this article:
Christ Church Cathedral, Waterford Facts for Kids. Kiddle Encyclopedia.