Avondale Forest is a wooded estate in County Wicklow, Ireland, on the west bank of the River Avonmore. It contains the home of Charles Stewart Parnell which was built in 1777 by Samuel Hayes and is now the Parnell Museum. The park is rich in wildlife and notable features include the exotic tree trail and a well-developed arboretum. 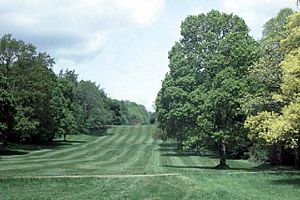 Avondale is reflective of the wider practices and history of Irish forests. Little native woodland remains, foreign species are planted for their high return and little thought was given to restoring Ireland's native woodlands.

The forest park lies mainly on the west bank of the Avonmore River covering 214 hectares of land. The ruins of Parnell's old sawmill and Parnell's well are located in the park.

There is a weekly parkrun every Saturday at 9:30 am.

Avondale Forest Park is planned for redevelopment in late 2019 into 2020. A new cafe restaurant is proposed along with a visitor centre on 'the great ride' (a long stretch of green space in the middle of Avondale along which horses were ridden in times past), and new subterranean and new tree canopy walkways are also proposed.

All content from Kiddle encyclopedia articles (including the article images and facts) can be freely used under Attribution-ShareAlike license, unless stated otherwise. Cite this article:
Avondale Forest Facts for Kids. Kiddle Encyclopedia.