County Kildare (Irish: Contae Chill Dara) is a county in Ireland. It is located in the province of Leinster and is part of the Mid-East Region. It is named after the town of Kildare. Kildare County Council is the local authority for the county which has a population of 222,130.

Kildare is the 24th largest of Ireland's 32 counties in area and seventh largest in terms of population. It is the eighth largest of Leinster's twelve counties in size, and second largest in terms of population. It is bordered by the counties of Carlow, Laois, Meath, Offaly, Dublin and Wicklow. As an inland county, Kildare is a generally lowland region. The county's highest points are the foothills of the Wicklow Mountains bordering to the east. The highest point in Kildare is Cupidstown Hill on the border with Dublin, with the better known Hill of Allen in central Kildare. 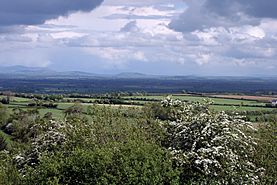 Looking east across the broad plains of South Kildare to the distant Wicklow Hills.

The county has three major rivers running through it: the Barrow, the Liffey and the Boyne. The Grand Canal crosses the county from Lyons on the east to Rathangan and Monasterevin on the west. A southern branch joins the Barrow navigation at Athy. The Royal Canal stretches across the north of the county along the border with Meath. Pollardstown Fen is the largest remaining calcareous fen in Ireland, covering an area of 220 hectares and is recognised as an internationally important fen ecosystem with unique and endangered plant communities, and declared a National Nature Reserve in 1986.

The Bog of Allen is a large bog that extends across 958 km2 and into County Kildare, County Meath, County Offaly, County Laois, and County Westmeath. Kildare has 243 km2 of bog (almost 14% of Kildare's land area) mostly located in the south-west and north-west, a majority of this being Raised Bog. It is habitat to over 185 plant and animal species.

There are 8,472 hectares (20,930 acres) of Forested land in Kildare, accounting for roughly 5% of the county's total land area. 4,056 hectares of this is Coniferous, while there is 2,963 hectares of Broadleaf and the remaining area are Unclassified Species. Coillte and Dúchas currently own 47% of the forestry. Coillte run Donadea Forest Park which is in North-Central Kildare. The forest covers 259 hectares of mixed woodland (60% Broadleaf, 40% Conifer) and is the largest forest park in Kildare.

Kildare was shired in 1297 and assumed its present borders in 1832, following amendments to remove a number of enclaves and exclaves.

The county was the home of the powerful Fitzgerald family. Parts of the county were also part of the Pale area around Dublin.

The N4(M4) from Dublin to Sligo travels along the north of the county by-passing the towns of Leixlip, Maynooth and Kilcock.

The N7(M7) from Dublin to Limerick runs through the county and by-passes the towns of Naas, Newbridge, Kildare and Monasterevin. This road is colloquially referred to as the "Naas Dual carriageway" because when it was originally up-graded in 1964 the road from Dublin to Naas was a double-lane carriageway, one of the first of its kind in Ireland.

The N9(M9) is another National Primary Route that commences at Kilcullen and ends at Waterford. It is motorway standard to Waterford, with a small gap of single-lane carriageway between Carlow and Kilkenny (full motorway due for completion September 2010).

The County is also served by the trains connecting with Dublin, South Leinster, Munster and South Connaught, with daily connections to Cork, Waterford, Limerick, and Galway. The principal Irish Rail intercity train station in the county is Kildare, however, Newbridge, Sallins, Maynooth and Hazelhatch are also served by a Dublin commuter train service called the Arrow.

Kildare is the centre of Ireland's Grand Canal network built in the late 18th century. This connects Kildare with Waterford, Dublin, Limerick and Athlone. The Royal Canal runs west from Dublin and parts of it form the boundary with County Meath.

County Kildare is twinned with the following places:

Both are major centres of the Thoroughbred breeding industry in their respective countries.

All content from Kiddle encyclopedia articles (including the article images and facts) can be freely used under Attribution-ShareAlike license, unless stated otherwise. Cite this article:
County Kildare Facts for Kids. Kiddle Encyclopedia.