Kildare (Irish: Cill Dara, meaning church of the oak) is a town in County Kildare, Ireland. Its population of 8,412 (2011 Census) makes it the eighth largest town in County Kildare and the 55th largest in the state, with a growth rate of 8% since the 2006 census. Although Kildare gives its name to the county, Naas is the county town. The town lies on the R445, some 50 km (31 mi) west of Dublin – near enough for it to have become, despite being a regional centre in its own right, a commuter town for the capital.

Rich in heritage and history, Kildare Town dates from the 5th Century, when it was the site of the original 'Church of the Oak' and monastery founded by Saint Brigid. This became one of the three most important Christian foundations in Celtic Ireland.

It was said that Brigid's mother was a Christian and that Brigid was reared in her father's family, that is with the children of his lawful wife. From her mother, Brigid learned dairying and the care of the cattle, and these were her occupations after she made a vow to live a life of holy chastity. Both Saint Mel of Ardagh and Bishop Mac Caille have been credited with the consecration of Brigid and some companions, after which the woman established a community beneath an oak tree, on a hill on the edge of the Curragh. Hence the name Cill Dara, the church of the oak.

Not too far away, on Dún Ailinne, lived the King of Leinster who had donated the site to the holy woman. A story told was that the King had offered Brigid as much land as her cloak would cover. When she spread her garment it miraculously stretched out to embrace the entire Curragh. True to his promise, the King gave her the fertile plain, and there the new community grazed their sheep and cows. 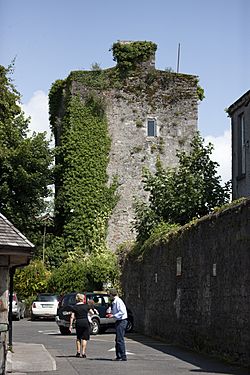 On Thursday, 2 July 1903 the Gordon Bennett Cup ran through Kildare. It was the first international motor race to be held in the United Kingdom as it then existed, an honorific to Selwyn Edge who had won the 1902 event in Paris driving a Napier. The Automobile Club of Great Britain and Ireland wanted the race to be hosted in the islands, and their secretary, Claude Johnson, suggested Ireland as the venue because racing was illegal on British public roads. The editor of the Dublin Motor News, Richard Mecredy, suggested an area in County Kildare, and letters were sent to 102 Irish MPs, 90 Irish peers, 300 newspapers, 34 chairmen of county and local councils, 34 County secretaries, 26 mayors, 41 railway companies, 460 hoteliers, 13 PPs, plus the Bishop of Kildare and Leighlin, Patrick Foley, who pronounced himself in favour. Local laws had to be adjusted, ergo the 'Light Locomotives (Ireland) Bill' was passed on 27 March 1903. Kildare and other local councils drew attention to their areas, whilst Queen's County declared That every facility will be given and the roads placed at the disposal of motorists during the proposed race. Eventually Kildare was chosen, partly on the grounds that the straightness of the roads would be a safety benefit. As a compliment to Ireland the British team chose to race in Shamrock green which thus became known as British racing green, although the winning Napier of 1902 had been painted Olive green.

The route consisted of two loops that comprised a figure of eight, the first was a 52-mile (84 km) loop that included Kilcullen, The Curragh, Kildare, Monasterevin, Stradbally, Athy, followed by a 40-mile (64 km) loop through Castledermot, Carlow, and Athy again. The race started at the Ballyshannon cross-roads (53°05′07″N 6°49′12″W﻿ / ﻿53.0853°N 6.82°W﻿ / 53.0853; -6.82) near Calverstown on the contemporary N78 heading north, then followed the N9 north; the N7 west; the N80 south; the N78 north again; the N9 south; the N80 north; the N78 north again. Competitors were started at seven-minute intervals and had to follow bicycles through the 'control zones' in each town. The 328 miles (528 km) race was won by the famous Belgian Camille Jenatzy, driving a Mercedes in German colours.

Dublin Coach offer a 24/7 services to Kildare Town and Kildare Village. Bus Éireann operates an expressway service between Dublin and Cork which calls at Kildare, whilst Dublin Coach operate services to Dublin Airport and Portlaoise.

Kildare railway station is located on the Dublin-Cork mainline and is served by the south western commuter service.

All content from Kiddle encyclopedia articles (including the article images and facts) can be freely used under Attribution-ShareAlike license, unless stated otherwise. Cite this article:
Kildare Facts for Kids. Kiddle Encyclopedia.