The Wonderful Barn facts for kids

The Wonderful Barn is a corkscrew-shaped building on the edge of Castletown House Estate, formerly of the Conolly family, in Celbridge, County Kildare, Ireland. The barn itself is formally in neighbouring Leixlip.

Flanked by two smaller dovecote towers, the barn was built with the stairs ascending around the exterior of the building. 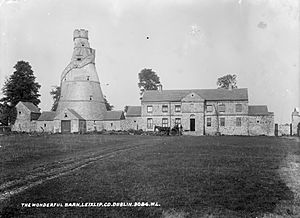 View of the Barn and the adjoining house, circa 1900.

The barn was built in 1743 on the Leixlip side of the Castletown Estate.

Several purposes are suggested for the unique structure:

The construction project also likely served as a way to keep the local poor employed. In this, it is not unlike the Conolly Folly (an Obelisk), which was built on the estate in 1740-41.

A similar structure known as the Bottle Tower, built in imitation of the Wonderful Barn, is located in Churchtown, close to Rathfarnham.

All content from Kiddle encyclopedia articles (including the article images and facts) can be freely used under Attribution-ShareAlike license, unless stated otherwise. Cite this article:
The Wonderful Barn Facts for Kids. Kiddle Encyclopedia.