Churchtown (Irish: Baile an Teampaill) is a largely residential suburb on the southside of Dublin, Ireland, between Rathfarnham and Dundrum. 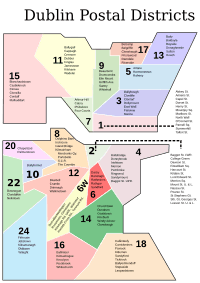 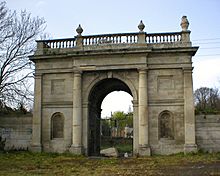 Braemor Road is still marked by a triumphal arch from the 18th century, which originally led to Rathfarnham Castle. The erection of this gateway is attributed to Henry Loftus, Earl of Ely from 1769 to 1783 who was also responsible for the classical work on the castle itself. The arch is named the new gate on Frizell’s map of 1779. After the division of the estate in 1913 the arch became the entrance to the Castle Golf Club but was later abandoned in favour of the more direct Woodside Drive entrance. Braemor Road (and Braemor Drive, Braemor Avenue, etc.) was developed in the late 1940s and early 1950s by builders called Brady and Morgan. They conflated and abbreviated the names resulting in the name Braemor

The Bottle Tower (or Hall's Barn) is a structure on Whitehall Road. It was built by Major Hall in 1742 in imitation of the better constructed Wonderful Barn erected about the same period near Leixlip. The floors and other timber work have long disappeared and the winding stone steps are not considered safe to ascend. While the ground floor may have been used as a barn, the first and second floors appear to have been residential as they are both fitted with fireplaces. A smaller structure behind the barn, built on somewhat similar lines was a pigeon house.

The old house named Whitehall, which was demolished some years ago, stood adjacent to the barn. It was also built by Major Hall around the same time. In 1778 it became the residence of Rev. Jeremy Walsh, curate of Dundrum, and in 1795 it was converted into a boarding house by Mr. Ml. Kelly. A newspaper advertisement in 1816 invites enquiries from prospective visitors. In a description written in the last century the old-fashioned kitchen and panelled staircase are specially noted.

Lewis' Topographical Dictionary of Ireland (1837) features many of the old houses in Churchtown under the reference village of Rathfarnham. The houses include Landscape, of H. O'Callaghan, Esq.; Whitehall, of W. P. Matthews, Esq.; Newtown, of John Kirby, Esq., LL.D., M.D., in the grounds of which there are some very fine evergreens. Also included is Barton Lodge, of W. Conlan, Esq. which probably gave the name of Barton Road, Rathfarnam and Barton Road East, Churchtown. Nutgrove, of P. Jones, Esq. which was suituated on Nutgrove Avenue, half way between the Good Shepherd church and Rathfarnam village and Whitehall, of T. Laffan, Esq., an out-office of which is built in the shape of a pottery furnace, with a winding flight of steps on the outside to the top, whence there is a commanding prospect of the surrounding country repeats our description of the Bottle Tower.

Rocque’s 1760 map of Dublin shows Newtown House at the bottom on the South Dublin county council historical map site. To the left of Newtown (or south) and along The Glen river would be Landscape House and Whitehall House. Above these (or west) would be Nutgrove House – half way to Rathfarnam village.

Taylor's 1816 map of the environs of Dublin gives a view of Churchtown, east of Ely’s Demense. This shows the present Landscape area, Newtown House (now Villas), Whitehall and Whitebarn. Landscape Road features between the Glen River and Newtown House and this seems to swing left onto modern day Braemor Road before meeting the modern day Dodder Park Road at Ely’s Arch. Nutgrove School also features, then The Ponds and further south is Barton Lane.

William Duncan's maps of the county of Dublin (1821) you can see White Barn and Newtown Villas. To the left of Newtown is a large house on what probably became Braemor Park. This was possibly Fetherstonaugh House which became the Church of Ireland Theological College or more likely Ardavon House which was the original Mount Carmel hospital building. 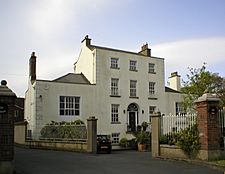 Berwick House is a tall building at the bend in Whitehall Road. Recently occupied by the De La Salle Brothers, it seems to be identical to a house named Waxfield where the death is recorded in 1766 of John Lamprey. In 1836 it was known as Hazelbrook, a name which was later transferred to the nearby, now defunct, Hughes Brothers milk bottling plant. The Hughes Brothers original house, built in 1898, and called Hazelbrook House, was rebuilt in the Bunratty Folk Park in 2001. From 1844 to 1899 it was known as Bachelor's Hall, after which it became the headquarters of a Charitable Institution under the name of Berwick Home. In 1944 it again became a private residence and the name was changed to Berwick House.

Loreto Terrace on the north side of Rathfarnam's Loreto Abbey was formerly known as "the Ponds", a name originating apparently from the large pond which two hundred years ago occupied the low-lying field between Loreto Terrace and Nutgrove Avenue. This area was described in Weston St. John Joyce's The Neighbourhood of Dublin in 1912 as the "dilapidated locality known as the Ponds" but it has since been largely rebuilt. An old photograph from Larry O'Connor's collection shows what it looked like at that time. The last of the old houses was demolished in the mid-1980s. It was a very early 18th century gabled residence named Grove Cottage and was probably the oldest occupied house in Dublin. This place was the scene of a skirmish at the outbreak of the rising of 1798. The insurgents of the south county assembled at the Ponds on 24 May 1798 under the leadership of David Keely, James Byrne, Edward Keogh and Ledwich. The latter two had been members of Lord Ely's yeomanry but had taken to the field with the United Irishmen. The insurgents were attacked by the local yeomanry corps but were able to defend themselves and the yeomanry was forced to retreat. A party of regular troops was then sent against them and a stiff encounter took place. A number of the insurgents were killed or wounded and some prisoners taken including Keogh and Ledwich. The survivors retreated, joining up with a party from Clondalkin, and a further engagement took place at the turnpike on the Rathcoole road where the enemy was successfully repulsed.

Based on the 2006 Census, the population of Churchtown is 8,736, a small decrease from the 2002 census. The break-out by electoral area is as follows: Churchtown-Castle 1,244 Churchtown-Landscape 1,198 Churchtown-Nutgrove 3,100 Churchtown-Orwell 1,871 Churchtown-Woodlawn 1,323 For further information see the CSO.i.e. website [1]

Churchtown has a number of shops and pubs, including a mid-size supermarket, which has one of Dublin's few kosher sales facilities. It is also one of Dublin's centres for the driving test with the highest pass rate in the county, the ninth highest in Ireland, at 48.31%

Nutgrove Shopping Centre was opened in October 1984 in what was then still a rural part of Dublin. The site for the shopping centre was located on part of the old Lamb's Jam orchards.

The centre included Ireland’s first drive through restaurant when McDonald's opened a branch there. The American style experience of driving up to the window, ordering your food and driving away was a novelty at the time.

There were other firsts when Nutgrove, including the country’s first social welfare services office was located in a shopping mall.

The suburb of Churchtown is probably named after St. Nahi's Church (Church of Ireland) just off the Churchtown road. It is more easily viewed these days from the William Dargan Bridge, close to Dundrum village. St. Nahi's was rebuilt several times—in 950, 1650 and 1750. The present restoration was completed in 1910. The public housing flats in Churchtown, across from the Bottle Tower pub, are named St. Nathy's after the church.

The local Roman Catholic church is the Good Shepherd Church. It was the site of the state funeral of former Taoiseach Seán Lemass, who lived on Hillside Drive.

The Quakers have a Meeting House on the Lower Churchtown Road.

The Good Shepherd National School is a co-educational national school in the parish of Churchtown while the boys' secondary school is De La Salle College. The De La Salle Brothers are the trustees of the college and it is under the control of a Board of Management. Famous past pupils include Damien Duff, who retired from the Republic of Ireland national football team in 2012. Jim Stynes who won an All-Ireland Minor (under 18) football championship medal for Dublin in 1984, and the Brownlow medal in Australian Rules Football in 1991. Jim's younger brother, Brian Stynes, also went to De La Salle College; he won a senior All Ireland football medal for Dublin in 1995. Des Fitzgerald, the former Irish international prop forward and father of current international player Luke, is a past pupil of DLS National and DLS College. He played in Croke Park in 1968 as a member of the DLS N.S. (old name for The Good Shepherd National School) Gaelic football team and in Landowne Road for the DLS Senior Rugby team later in 1975. Another player on both teams was John Treacy, the former Dublin Hurling full back and father of current Dublin Hurling star, David Treacy.

The local girls' secondary school is Notre Dame de Missions, one of whose alumni is Mary Lou McDonald, the current Vice President of Sinn Féin and a Teachta Dála (TD).

McDonald was a Member of the European Parliament (MEP), from 2004–2009 representing the Dublin constituency (Leaving Certificate class of 1988). On the 19th Oct 2016, The Notre Dame Schools Trust Ltd announced that the schools will close due to a lack of funding and outstanding debts. The Department of Education has acquired the Notre Dame campus and will use it for school purposes in the future.

The De La Salle Preparatory School, now closed, was located in Camberley House (also known as Inish More or Inish Ealga) on the Churchtown Road Upper. A previous owner was the widow of Eamon Ceannt, one of the signatories of the Proclamation of the Irish Republic. Camberley House was bought for the De La Salle boys' school and later developed as the preparatory school when the secondary school moved to its present location.

Mount Carmel Hospital, which stands on a 4.9 acre site on Braemor Park, was acquired by the Mount Carmel Medical Group in 2006. The hospital offered a variety of medical services from maternity care and specialist clinics to surgery and a dedicated orthopaedic unit. In January 2014 it was announced that the hospital was closing, as Mount Carmel Medical (South Dublin Ltd), which owned the hospital, was insolvent and unable to pay its debts. Subsequently, in Sept 2014, the hospital was bought by the HSE for a reported €11 million, with a reported intention to use the facility for patients who no longer need care in an acute hospital.

Churchtown's greatest claim to fame was HB Dairy – the home of the country's favourite ice cream. HB Ice Cream was named after the Hughes Brothers dairy and was produced at Hazelbrook Farm, across the road from the Good Shepherd national school until recently.

Until the late 1980s the County Club pub on the Churchtown Road Upper had a cabaret attached called the Braemor Rooms. The Dubliners had a residency every August and Guy Mitchell also played there. Unfortunately, the owners of the County Club decided to go the way of the disco / nightclub and changed The Braemor Rooms to Faces; this eventually led to the demise of the pub and club. It’s now leased out, called Rodeo Joe’s but only open two nights a week.

There’s a sound recording of one artist, Niall Toibin which is testimony to the style of humour of the day.

Recorded in the Braemor Rooms, Dublin, in October 1985.

Side 1. The new liturgy ; Recession ; A lesson in Irish ; Economics ; Roots & Noah's Ark

Side 2. Golf and allied sports ; The Irish abroad ; Fond thoughts of Cork ; Waterford and women's lib ; Onward to Kerry.

All content from Kiddle encyclopedia articles (including the article images and facts) can be freely used under Attribution-ShareAlike license, unless stated otherwise. Cite this article:
Churchtown, Dublin Facts for Kids. Kiddle Encyclopedia.