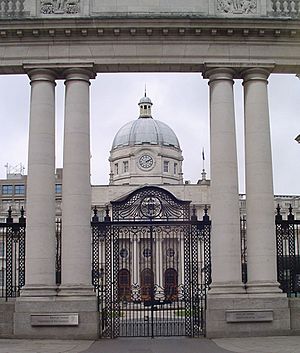 Department of the Taoiseach at Government Buildings, Merrion Street, Dublin

The Taoiseach (pronounced /ˈtiːʃəx/ in English), also referred to as An Taoiseach, is the head of the government in Ireland. The term prime minister is not used by the Irish media.

When a new Dáil Éireann meets after an election it nominates one of its members to be Taoiseach. He then visits the President, and is appointed. He then presents a list of ministers to the Dáil and when this is approved they are also appointed by the President.

Department of the Taoiseach

The Department of the Taoiseach helps the Taoiseach to do his job. The main duty of the Taoiseach is to start policy and coordinate policy of the rest of government. Especially policies on Economic and Social Development, Northern Ireland, the European Union and Public Sector Change and Oireachtas Reform.

The Government Chief Whip, who has to make sure the government's policies and ideas are turned into law, is a part of the Taoiseach's department.

All content from Kiddle encyclopedia articles (including the article images and facts) can be freely used under Attribution-ShareAlike license, unless stated otherwise. Cite this article:
Taoiseach Facts for Kids. Kiddle Encyclopedia.