The 2020 Irish general election took place on Saturday, 8 February 2020. This was the first election since 1918 to be held on a weekend instead of a weekday.

The election resulted in a hung parliament, with the three largest parties splitting the vote nearly evenly.

Fianna Fáil secured the most seats, with 38, then returning and unopposed Ceann Comhairle giving them a 1-seat advantage. Sinn Féin finished with the most first-preference votes of any party and 37 seats to obtain the party's best showing since the foundation of the modern Republic of Ireland. Fine Gael, the party of Taoiseach Leo Varadkar, finished third in both number of seats (35) and first-preference votes.

Since a coalition needs the support of 80 or more TDs in the 160-seat Dáil and no two parties have that many seats between them, any coalition would require the support of smaller parties or independent TDs to govern.

The chart below shows the results of opinion polls since the previous general election. 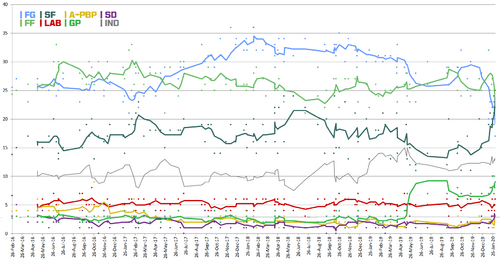 All content from Kiddle encyclopedia articles (including the article images and facts) can be freely used under Attribution-ShareAlike license, unless stated otherwise. Cite this article:
2020 Irish general election Facts for Kids. Kiddle Encyclopedia.