Politics of the Republic of Ireland facts for kids

Ireland is a parliamentary, representative democratic republic and a member state of the European Union. While the head of state is the popularly elected President of Ireland, it is a largely ceremonial position with real political power being vested in the indirectly elected Taoiseach (leader of government) who is the head of the government.

Executive power is exercised by the government which consists of no more than 15 cabinet ministers, inclusive of the Taoiseach and Tánaiste (deputy leader of government). Legislative power is vested in the Oireachtas, the bicameral national parliament, which consists of Dáil Éireann, Seanad Éireann and the President of Ireland. The judiciary is independent of the executive and the legislature. The head of the judiciary is the Chief Justice who presides over the Supreme Court.

While there are a number of political parties in the state, the political landscape has been dominated for decades by Fianna Fáil and Fine Gael, historically opposed and competing entities, which both occupy the traditional centre ground. From the 1930s until 2011 they were the largest and second largest parties respectively. Both parties trace their roots back to the opposing sides of the civil war. The Labour Party, historically the state's third political party has only ever been in power when in coalition with either of the two main parties. In 2011 there was a major political realignment in Ireland, with Fine Gael becoming the largest party, Labour the second, and Fianna Fáil dropping to third following a collapse in support, while Sinn Féin saw a substantial increase in support.

The state operates under the Constitution of Ireland (Irish: Bunreacht na hÉireann) which was adopted in 1937 by means of a plebiscite. The constitution falls within the liberal democratic tradition. It defines the organs of government and guarantees certain fundamental rights. The Constitution can only be amended by means of a referendum. Important constitutional referenda have concerned issues such as abortion, the status of the Catholic Church, divorce, European Union and same-sex marriage. 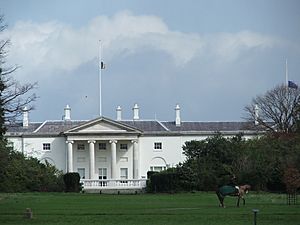 The head of state is the President of Ireland. In keeping with the state's parliamentary system of government the President exercises a mainly ceremonial role but does possess certain specific powers. The presidency is open to all Irish citizens who are at least 35. They are directly elected by secret ballot under the alternative vote. A candidate may be nominated for election as President by no fewer than 20 members of the Oireachtas or by four or more of Ireland's 34 County and City Councils. A retiring President may nominate themselves as a candidate for re-election. If only one valid candidate is nominated for election, for example if there is consensus among the political parties to nominate a single candidate, it is unnecessary to proceed to a ballot and that candidate is deemed elected. The President is elected to a seven-year term of office and no person may serve more than two terms. 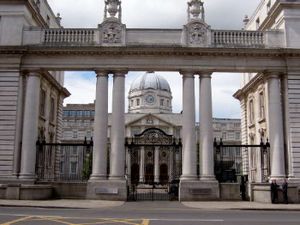 Executive authority is exercised by a cabinet known simply as the Government. Article 28 of the Constitution states that the Government may consist of no less than seven and no more than fifteen members, namely the Taoiseach (prime minister), the Tánaiste (deputy prime minister) and up to thirteen other ministers. The Taoiseach is appointed by the President, after being nominated by Dáil Éireann (the lower house of parliament). The remaining ministers are nominated by the Taoiseach and appointed by the President following their approval by the Dáil. The Government must enjoy the confidence of Dáil Éireann and, in the event that they cease to enjoy the support of the lower house, the Taoiseach must either resign or request the President to dissolve the Dáil, in which case a general election follows.

See also: State-sponsored bodies of the Republic of Ireland

The Government, through the civil and public services and state-sponsored bodies, is a significant employer in the state; these three sectors are often called the public sector. Management of these various bodies vary, for instance in the civil service there will be clearly defined routes and patterns whilst among public services a sponsoring minister or the Minister for Finance may appoint a board or commission. Commercial activities, where the state involves itself, are typically through the state-sponsored bodies which are usually organised in a similar fashion to private companies.

The civil service of Ireland consists of two broad components, the Civil Service of the Government and the Civil Service of the State. Whilst these two components are largely theoretical, they do have some fundamental operational differences. The civil service is expected to maintain the political impartiality in its work, and some sections of it are entirely independent of Government decision making.

Main page: Public service of the Republic of Ireland

A number of political parties are represented in the Dáil and coalition governments are common. The Irish electoral system has been characterised by the two and a half party system, with two large catch all parties dominating. This changed after the 2011 Irish General Election, following the large drop in support for Fianna Fáil and the rise in support for other parties.

The current largest party in the state is Fine Gael, which has its origins in the pro-treaty movement of Michael Collins in the Irish Civil War. Traditionally the party of law and order, it is associated with strong belief in pro-enterprise and reward. Despite expressions of Social Democracy by previous leader Garrett Fitzgerald, today, it remains a Christian democratic, economically liberal party along European lines, with a strongly pro-European outlook. Fine Gael was formed out of a merger of Cumann na nGaedheal, the Centre Party and the Blueshirts. In recent years it has generally been associated with a liberal outlook. It has formed government in the periods 1922–32 (Cumann na nGaedheal), 1948–51, 1954–57, 1973–77, 1981–82, 1982–87, 1994–97, and 2011 to present.

Fianna Fáil, a traditionally Irish republican party founded in 1927 by Éamon de Valera, is the second largest party. It first formed a government on the basis of a populist programme of land redistribution and national preference in trade and republican populism remains a key part of its appeal. It has formed government seven times since Ireland gained independence: 1932–48, 1951–54, 1957–73, 1977–81, 1982, 1987–94, and 1997–2011. Fianna Fáil was the largest party in the Dáil to 2011. It lost a huge amount of support in the 2011 general election but has since regained some support.

The third largest party is Sinn Féin, established in its current form in 1970. The original Sinn Féin played a huge role in the Irish War of Independence and the First Dáil. Fine Gael and Fianna Fáil trace their origins to that party. The current day party has been historically linked to the Provisional IRA. The party is a Republican party which takes a more left wing stance on economics and social policy than the Labour Party.

The fourth largest party in the state is the centre-left Labour Party which was founded by James Connolly and Jim Larkin in 1912. Labour have formal links with the trade union movement and have governed in seven coalition governments – six led by Fine Gael and one by Fianna Fáil. This role as a junior coalition partner has led to Labour being classed as the half party of Ireland's two and a half party system.

Other parties and political alliances represented in the Dáil after the Irish general election, 2016 are the Independents 4 Change, Social Democrats (Ireland) and Green Party (Ireland).

A number of independent TDs such as Maureen O'Sullivan, Mick Wallace, Finian McGrath, John Halligan and Thomas Pringle largely hold left-wing views. An Independent Alliance (Ireland), a loose alliance of independents formed in 2015 and returned 6 TDs after the 2016 election. 5 of the 6 helped elect Enda Kenny Taoiseach again after than election and have since entered Government in various forms since.

Main page: Foreign relations of the Republic of Ireland

Ireland's foreign relations are substantially influenced by its membership of the European Union, although bilateral relations with the United States and United Kingdom are also important to the country. It is one of the group of smaller nations in the EU, and has traditionally followed a non-aligned foreign policy.

Ireland tends towards independence in foreign policy, thus it is not a member of NATO and has a longstanding policy of military neutrality.

This policy has helped the Irish Defence Forces to be successful in their contributions to UN peace-keeping missions since 1960 (in the Congo Crisis ONUC) and subsequently in Cyprus (UNFICYP), Lebanon (UNIFIL), Iran/Iraq Border (UNIIMOG), Bosnia and Herzegovina (SFOR & EUFOR Althea), Ethiopia and Eritrea (UNMEE), Liberia (UNMIL), East Timor (INTERFET), Darfur and Chad (EUFOR Tchad/RCA). Irish Defence Forces do not deploy in Missions

Northern Ireland has been a major factor in Irish politics since the island of Ireland was divided between Northern Ireland and what is now the Republic in 1920. The creation of Northern Ireland led to conflict between northern nationalists (mostly Roman Catholic) who seek unification with the Republic and Unionists (mostly Protestant) who opposed British plans for Irish Home Rule and wished for Northern Ireland to remain within the United Kingdom. After the formation of Northern Ireland in 1921 following its opt out from the newly formed Irish Free State, many Roman Catholics and Republicans were discriminated against. The abolition of Proportional Representation and the gerrymandering of constituency boundaries led to Unionists being over-represented at Stormont and at Westminster. Even James Craig who was prime minister of Northern Ireland boasted of his Protestant Parliament for a Protestant People. In the 1960s NICRA was set up to end discrimination between Catholics and Protestants. There was a massive backlash to this from sections of the Unionist community. This conflict exploded into violence in the late sixties with the beginning of the Troubles, involving groups such as the Provisional IRA, loyalist paramilitaries, the police and the British army, the latter originally drafted in to protect Catholic communities from loyalist violence. These clashes were to result in the suspension of the Stormont Parliament and unsuccessful efforts by the British Government to encourage a power-sharing Executive in Northern Ireland which were only realised following the Good Friday Agreement in 1998. The Troubles caused thousands of deaths in Northern Ireland but also spilled over into bombings and acts of violence in England and the Republic.

Since its foundation it has been the stated long-term policy of governments of what is now the Republic to bring an end to the conflict in Northern Ireland and to bring about a united Ireland. Northern Ireland has also, in the past, often been a source of tension between the Irish Government and the government of the United Kingdom. To find a solution to the Troubles the Irish Government became a partner in the Good Friday Agreement in 1998.

While Sinn Féin have long organised in both Northern Ireland and the Republic, Fianna Fáil have recently opened a cumann (branch) in Derry and begun recruiting members at Queen's University, Belfast although both are extremely small.

Under the Belfast Agreement (also known as the Good Friday Agreement) and Article 3 of the constitution a North-South Ministerial Council and six North-South Implementation Bodies co-ordinate activities and exercise a limited governmental role within certain policy areas across the whole island of Ireland. The Implementation Bodies have limited executive authority in six policy areas. Meetings of the Council take the form of meetings between ministers from both the Republic's Government and the Northern Ireland Executive. The Council was suspended from 2002 to 2007. However, with the resumption of devolved government in Northern Ireland in May 2007, the Council has now re-assumed its duties.

All content from Kiddle encyclopedia articles (including the article images and facts) can be freely used under Attribution-ShareAlike license, unless stated otherwise. Cite this article:
Politics of the Republic of Ireland Facts for Kids. Kiddle Encyclopedia.