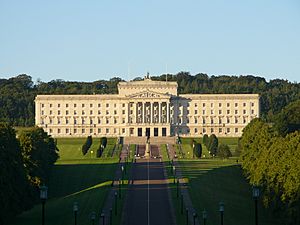 Parliament Buildings at Stormont, Belfast, seat of the assembly

Elections to the Northern Ireland Assembly are by single transferable vote with five representatives (Members of the Legislative Assembly, MLAs) elected from 18 parliamentary constituencies. Eighteen representatives to the lower house of the British parliament (Members of Parliament, MPs) are elected from the same constituencies using the first-past-the-post system. However, not all of these take their seats. The four Sinn Féin MPs refuse to take the required oath to serve Queen Elizabeth II. In addition, the upper house of the UK's parliament, the House of Lords, currently has some 25 appointed members from Northern Ireland. Northern Ireland itself forms a single constituency for elections to the European Union.

Much of the population of Northern Ireland identifies with one of two different ideologies, unionism (which wants the region to remain part of the United Kingdom) and Irish nationalism (which wants a united Ireland). Unionists are predominantly Ulster Protestant, most of whom belong to the Presbyterian Church in Ireland and the Church of Ireland. Irish nationalists are predominantly Catholic.

Voting patterns break down as follows:

Shows the percentage of votes, or first preference votes, cast for unionist, nationalist and other candidates in elections in Northern Ireland. 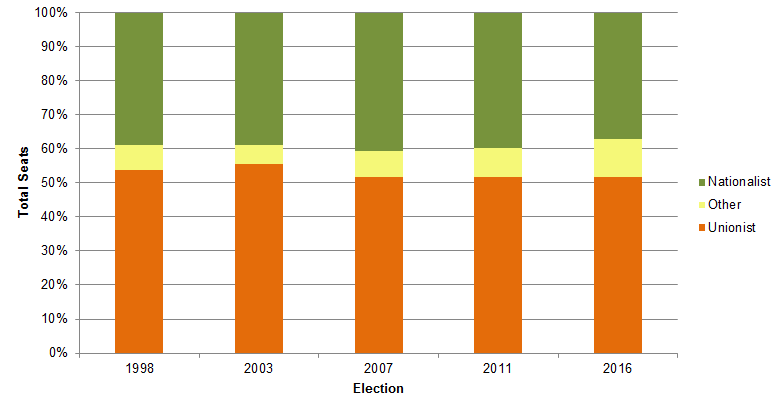 In all elections in Northern Ireland the single transferable vote system of proportional representation is used except for the House of Commons elections where a "first past the post" or plurality voting system is used.

Proposed representation in the Republic

Sinn Féin, currently the biggest of the nationalist parties in Northern Ireland, has campaigned for a broadening of the franchise of Northern Ireland voters to allow them to vote in elections to choose the President of Ireland. It has also demanded that all Northern Ireland Members of the European Parliament (MEPs) and MPs be allowed speaking rights in the lower house of the parliament of the Republic of Ireland, Dáil Éireann. It was given to understand that the Irish government accepted this and had plans to introduce legislation in the autumn of 2005. The Social Democratic and Labour Party (SDLP) backed the move. However, a spokesman for Taoiseach Bertie Ahern later rowed back, stating that it had never been intended that the MPs have a right to attend plenary sessions of the Dáil, but that they would be invited to participate in Oireachtas committees dealing with Northern Ireland matters, and only if there was all-party agreement behind it. The unionist parties, along with Fine Gael, Labour and the Progressive Democrats have all declared their opposition to the move, as has much of the Irish media, with articles highly critical of the proposal published in The Irish Times and the Sunday Independent. Nonetheless on 22 November 2007, representatives from both Sinn Féin and the SDLP, (unionists declined the invitation) attended a meeting of the Oireachtas committee reviewing the workings of the Good Friday Agreement. The 18 Northern Ireland MPs can take part in this committee's debates (as well as other relevant committees by invitation), but will not have a right to vote or to move motions and amendments.

Political parties in Northern Ireland can be divided into three distinct categories:

The Ulster Unionist Party was historically a cross-class massenpartei who ran the Northern Ireland Government in a dominant-party system from its creation until 1972, although since the rise of the DUP in the 1970s, its support has been concentrated more in the middle class. Until 1972 the UUP's members of the British House of Commons took the Conservative Party whip, but currently sit as a party in their own right. The UUP's member of the European Parliament belongs to the European Conservatives and Reformists Group.

The DUP are a more complex mixture than the other major parties, combining support from rural evangelicals and urban, secular, working class voters. The party is firmly to the right on issues such as abortion, capital punishment, European integration and equal opportunities, although it seems to be moderating its stance on gay rights since the "Save Ulster from Sodomy" campaign of the 1980s. Conversely, the DUP often support social programmes which benefit their working class or agricultural base, for example, free public transport for the elderly and European Union agricultural subsidies. The DUP have grown in recent years as they were originally the only major party to oppose the Good Friday Agreement, although until September 2015 they were part of a government operating it.

Similarly, on the nationalist side of the political spectrum, Sinn Féin has overtaken the traditionally dominant SDLP in recent elections. Sinn Féin is a left-wing Irish republican party, committed to espousing an all-Ireland republic. Traditionally the party of the urban Catholic working class and a number of republican rural areas, since the IRA ceasefires of the mid-1990s it has expanded its base considerably and has overtaken the long-dominant SDLP in terms of vote share.

The SDLP are a nominally social democratic party and a full member of the Party of European Socialists and Socialist International. However, as the Northern Ireland party system is not based on socio-economic divisions, it attracts a wide spectrum of opinion and has a middle class support base. The SDLP support Irish reunification, but utterly reject the use of violence as a means to that end. The SDLP has lost considerable support in the past decade, with the retirement of key figures such as former leader John Hume and deputy leader Seamus Mallon and the IRA's cessation of violence. The party has members who wish to follow an agenda focusing primarily on "bread and butter issues" (taxation, employment, education, health, etc.) and those who wish to follow a more nationalist campaign to challenge Sinn Féin.

Unlike in unionism, religion is—according to the study of Evans and Duffy—not a major factor in patterns of nationalist parties' supporters (although Sinn Féin supporters tend to be more secular). Age has a strong impact on party choice: the more radical Sinn Féin has more support among the young than the SDLP has. The most important factor is attachment to nationalist ideology: Sinn Féin has high levels of support among people strongly committed to nationalism

Cross-community and other parties

Among the cross-community parties, the Alliance Party of Northern Ireland draws its support mainly from middle class professionals in the suburbs of Belfast. It professes to be the only significant party which does not base its political stance around the constitutional question. The party has strong links with the Liberal Democrats in Britain and is a member of the European Liberal Democrat and Reform Party and Liberal International.

Fianna Fáil, the second-largest party in the Republic, opened a cumann (branch) in Derry, and begun recruiting at Queens University Belfast. The leadership as of 2005[update] had decided not to take part in electoral politics in Northern Ireland, however in the latter part of 2007 the Taoiseach said his party was consulting its grassroots on the possibility of contesting elections in the North, and that in advance of this Fianna Fáil had registered as a political party in Northern Ireland. Some, within both Fianna Fáil and the SDLP (including former SDLP European elections candidate Martin Morgan) have advocated an alliance, or even a merger, between both parties. However, many in both parties are hostile to the idea, with some in the SDLP pointing out the left-wing links between the party and the Irish Labour Party.

Some commentators believe there are indications that the religious and ethnic basis of the party system may start to disintegrate. For example, in the 1998–2003 Assembly, there was a Catholic Member of the Legislative Assembly sitting for the Ulster Unionist Party. The SDLP have had a number of Protestant representatives in the past and a Protestant SDLP councillor defected to Sinn Féin in 2004. Up to now, these have been one-off events, which have occurred periodically throughout Northern Ireland's history without setting a trend—cf Sir Denis Henry in the early part of the 20th century. In any event, social class is an important part of competition within the main ethnic political blocs, and class-based party structures in other established democracies have weakened since the end of the Cold War. Since the beginning of the peace process, the less overtly ethnic parties have declined, while the more radical Sinn Féin and DUP have prospered.

There are indications that party stances on issues like same-sex marriage (unionist parties are more conservative, nationalist ones more liberal) are causing people who feel strongly about these issues to vote accordingly, rather than on the constitutional issue.

All content from Kiddle encyclopedia articles (including the article images and facts) can be freely used under Attribution-ShareAlike license, unless stated otherwise. Cite this article:
Politics of Northern Ireland Facts for Kids. Kiddle Encyclopedia.