Áras an Uachtaráin facts for kids

Áras an Uachtaráin, is the official home of the President of Ireland. The name means "House of the President" in Irish. It is in the Phoenix Park on the northside of Dublin. It used to be known as the Viceregal Lodge.

The original house was designed by park ranger and amateur architect, Nathaniel Clements in the mid eighteenth century. It was bought by the Lord Lieutenant of Ireland. His official residence was in the Viceregal Apartments in Dublin Castle. The house in the park then became the Viceregal Lodge, the "out of season" residence of the Lord Lieutenant (also known as the Viceroy), where he lived for most of the year from the 1820s onwards. During the Social Season (January to St. Patrick's Day in March) he lived in Dublin Castle.

Residence of the Governor-General of the Irish Free State

Residence of the President of Ireland 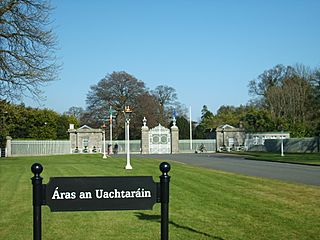 The main gate to Áras an Uachtaráin

The house was left empty for some years, until the office of President of Ireland was created in 1937. In 1938, the first President, Douglas Hyde lived there temporarily while plans were made to build a new presidential palace on the grounds. The outbreak of World War II saved the building, which had been renamed Áras an Uachtaráin as plans were put on hold. By 1945 it had become too closely identified with the presidency of Ireland to be demolished. But because it had not been lived in, a lot of work was needed to rebuild and improve it, especially to the kitchens, servants' quarters and chapel.

The first President, Douglas Hyde lived in the residential quarters on the first floor of the main building. Later presidents moved to the new wing attached to the main house that had been built on for the visit of King George V in 1911. However, in 1990 Mary Robinson moved back to the older main building. The current occupant, Mary McAleese lives in the 1911 wing.

Beside it being the home of the president, it has a few state rooms for official occasions. Áras an Uachtaráin also houses the headquarters of the Garda Mounted Unit.

Various visiting British kings and queens stayed at the Viceregal Lodge, notably Queen Victoria and George V. American presidents that visited include Presidents John F. Kennedy, Richard Nixon, Ronald Reagan and Bill Clinton, who are all of Irish descent. Other famous visitors to the Áras an Uachtaráin have been Princess Grace of Monaco and her husband, Prince Rainier III; King Baudouin of the Belgians; King Juan Carlos and Queen Sophia; Pope John Paul II; Prince Charles, and Prince Philip.

Guests do not normally stay at Áras an Uachtaráin. Although it has ninety-two rooms, many of these are used for storage of presidential files, for household staff and official staff, including military aides-de-camp, a Secretary to the President and a press office. In 2001, the Irish state opened a guest residence nearby in Farmleigh, a former Guinness mansion.

On 1 May 2004, during Ireland's six-month presidency of the European Union, Áras an Uachtarain was the Venue for the European Day of Welcomes (Accession Day) in which ten new members joined the EU. All 25 heads of government attended the flag raising ceremony in the gardens of the palace.

Áras an Uachtaráin is now open for free tours every Saturday.

All content from Kiddle encyclopedia articles (including the article images and facts) can be freely used under Attribution-ShareAlike license, unless stated otherwise. Cite this article:
Áras an Uachtaráin Facts for Kids. Kiddle Encyclopedia.