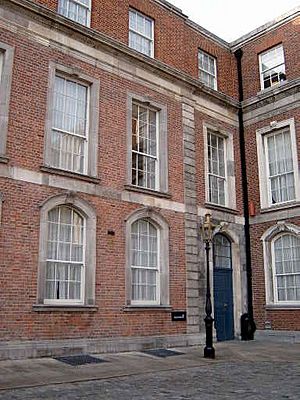 The Chief Secretary for Ireland was the British Cabinet minister with responsibility for Irish affairs. It was the second most important politician in Ireland, after the Lord Lieutenant of Ireland. From the late 18th century and early 19th century onwards the Chief Secretary would also sit in the British cabinet. Because of this, he was better connected and became more powerful that the Lord Lieutenant. From 1922, the Irish were no longer ruled by the British king, and the political office disappeared.

They used to live in the Chief Secretary's Lodge in the Phoenix Park.

All content from Kiddle encyclopedia articles (including the article images and facts) can be freely used under Attribution-ShareAlike license, unless stated otherwise. Cite this article:
Chief Secretary for Ireland Facts for Kids. Kiddle Encyclopedia.