Born Mary Therese Winifred Bourke in Ballina, County Mayo in 1944, Mary Robinson was the daughter of two medical doctors. The Bourke family has been in Mayo since the thirteenth century. One ancestor was a leading activist in the Irish National Land League in Mayo and the Irish Republican Brotherhood; an uncle, Sir Paget John Bourke, was knighted by Queen Elizabeth II after a career as a judge in the Colonial Service; while another relative was a Roman Catholic nun.

Robinson got the permission of the then Archbishop of Dublin, John Charles McQuaid to study in Trinity College, Dublin (TCD); at the time Roman Catholics were forbidden by church rules from studying in TCD without special permission, called a dispensation. TCD once did not allow Catholics to study. In her twenties, she was appointed Professor of Law in the college.

She was elected one of Trinity College's three members of Seanad Éireann in 1969.

She was also on several Senate/Oireachtas committees: 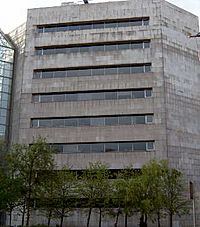 One of the Civic Offices (nicknamed the 'Bunkers').
Dublin Corporation controversially built them on what had been one of the world's best preserved Viking sites, at Wood Quay. Robinson gave legal support to the leaders of the unsuccessful campaign to save the site.

In 1982, the Labour Party entered into a coalition government with Fine Gael. Many expected Robinson to be the attorney-general, but the Labour party leader instead picked an unknown, new senior counsel called John Rogers. Shortly afterwards, Robinson resigned from the party in protest at the Anglo-Irish Agreement, she said that unionist politicians in Northern Ireland should have been consulted as part of the deal.

Robinson decided not to seek re-election to the senate in 1989. One year later she agreed to become the first Labour candidate for the presidency and the first woman candidate in what was only the second presidential election to be contested by three candidates since 1945.

Candidates from other parties

The main opposition party, Fine Gael was no well organised. They gambled that former Taoiseach Garret FitzGerald would run as its candidate (but for two years he had been saying no), then they asked Peter Barry, who had previously been willing to run but had run out of patience and was no longer interested. The party's third choice was the former civil rights campaigner Austin Currie, a new TD and former minister in Brian Faulkner's power-sharing executive in Northern Ireland from 1973-1974.

Fianna Fáil chose Tánaiste and Minister for Defence, Brian Lenihan. Lenihan was popular and widely seen as humorous and intelligent. Like Robinson he had made liberal policy reforms. In the 1960s he abolished censorship, for example. He was seen as a near certainty to win the presidency. The only question asked was whether Robinson would beat Currie and come second.

But Taoiseach Charles Haughey of Fianna Fáil was not popular, and the Labour Party leader Dick Spring was becoming more popular.

During the campaign people found out that what Lenihan had told friends in private showed he had lied in public about the 1982 dissolution of Dáil Éireann.

Lenihan denied he had pressured the President but then a tape was produced of an 'on the record' interview he had given to a postgraduate student the previous May where he talked about trying to apply pressure. Lenihan claimed that "on mature recollection" he had not pressured the President and had been confused in his interview with the student. But the government threatened to fall over the issue.

Lenihan was dismissed as Tánaiste and Minister for Defence.

Lenihan still managed to win the first count. In the Single Transferable Vote system Austin Currie was eliminated and his second choice votes were counted. Most were for Robinson. Lenihan became the first Fianna Fáil presidential candidate in the history of the office to lose a presidential election. Robinson now became President.

Robinson was a popular president, before he died in 2002 Brian Lenihan said that she was a better president than he ever could have been. She often visited Britain, and became the first Irish president to visit Queen Elizabeth II at Buckingham Palace. She welcomed visits by senior British royals, most notably the Prince of Wales to Áras an Uachtaráin. On one trip to Belfast she met with the local MP, Gerry Adams, the President of Sinn Féin. Foreign Minister Dick Spring, who was leader of the Labour Party, privately advised her not to meet Adams. However the Government did not formally advise her not to meet with him, so she felt it would be wrong,not to meet the local member of parliament during her visit, and was photographed publicly shaking his hand. During her various visits to Northern Ireland, she in fact regularly met politicians of all parties, including David Trimble of the Ulster Unionist Party and John Hume of the Social Democratic and Labour Party.

Charles Haughey died not like her, even stopping her from delivering the important BBC Dimbleby Lecture. Haughey's successors as Taoiseach, Albert Reynolds (Fianna Fáil: 1992-94), John Bruton (Fine Gael: 1994-97) and Bertie Ahern (Fianna Fáil:1997- ) never hid their admiration of her work. Bruton and Ahern both tried to get her the United Nations High Commissioner for Human Rights.

Robinson became the United Nations High Commissioner for Human Rights on 12 September 1997, resigning the Presidency a few weeks early with the approval of Irish political parties in order to take up the post. Newspaper reports say that she had been asked by Secretary General of the United Nations Kofi Annan to become a public campaigner

Robinson was the first High Commissioner for Human Rights to visit Tibet, making her trip in 1998. During her tenure she criticised the Irish system of permits for non-EU immigrants, and criticised the United States' use of capital punishment. Though she had initially announced her intention to serve a single four-year period, she extended the term by a year following an appeal from Annan, allowing her to preside over the 2001 World Conference against Racism, Racial Discrimination, Xenophobia and Related Intolerance in Durban, South Africa, as Secretary-General. Robinson's posting as High Commissioner ended in 2002.

Mrs Robinson is the twenty fourth, and first female, Chancellor of University of Dublin.

On 18 July 2007 in Johannesburg, South Africa, Nelson Mandela, his wife Graça Machel, and Desmond Tutu convened a group of world leaders to contribute their wisdom, independent leadership and honesty to tackle some of the world's toughest problems. Nelson Mandela announced the formation of this new group, The Elders, in a speech he delivered on his 89th birthday.

Media coverage in The Irish Times, The Irish Independent, The Examiner (now renamed the Irish Examiner), The Star, The Irish Mirror, The Irish Sun, Sunday Tribune, The Sunday Independent, The Sunday Times, The Times, The Daily Telegraph and The Guardian. Also briefing notes issued on various occasions (notably state, official or personal visits by Robinson abroad) supplied by the Irish Department of Foreign Affairs, The Foreign and Commonwealth Office, Buckingham Palace, Áras an Uachtaráin, the Holy See and the press offices of the United Nations (including [1] the text of her Romanes Lecture in November 1997). Some background came via an interview with Mrs. Robinson.

The Korea Liberator: [2] Criticism of Robinson's failure to speak out while North Korea deliberately starved two million of its people to death, largely during her tenure (warning: graphic image).

All content from Kiddle encyclopedia articles (including the article images and facts) can be freely used under Attribution-ShareAlike license, unless stated otherwise. Cite this article:
Mary Robinson Facts for Kids. Kiddle Encyclopedia.