Kinshasa is the capital and the largest city of the Democratic Republic of the Congo. The city is situated alongside the Congo River. Once a site of fishing and trading villages, Kinshasa is now a megacity with an estimated population of more than 11 million. It faces Brazzaville, the capital of the neighbouring Republic of the Congo, which can be seen in the distance across the wide Congo River, making them the world's second-closest pair of capital cities after Rome and Vatican City.

Kinshasa is a city of sharp contrasts, with affluent residential and commercial areas and three universities alongside sprawling slums. 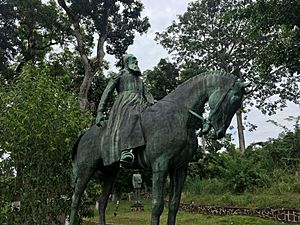 Statue of Léopold II at Kinshasa

The city was founded as a trading post by Henry Morton Stanley in 1881.It was named Léopoldville in honour of King Leopold II of the Belgians, who controlled the Congo Free State, the vast territory that is now the Democratic Republic of the Congo, not as a colony but as a private property. The post flourished as the first navigable port on the Congo River above Livingstone Falls, a series of rapids over 300 kilometres (190 miles) below Leopoldville.

By 1923, the city was elevated to capital of the Belgian Congo, replacing the town of Boma in the Congo estuary. The town, nicknamed "Léo" or "Leopold", became a commercial centre and grew rapidly during the colonial period.

After gaining its independence on 30 June 1960, following riots in 1959, the Republic of the Congo elected its first prime minister, Patrice Lumumba. Lumumba's determination to have full control over Congo's resources to improve the living conditions of his people was perceived as a threat to Western interests. 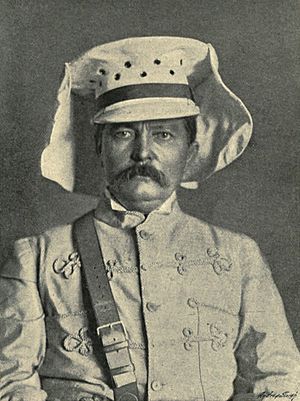 This being the height of the Cold War, the U.S. and Belgium did not want to lose control of the strategic wealth of the Congo, in particular its uranium.

Less than a year after Lumumba's election he was assassinated. In 1965, with the help of the U.S. and Belgium, Joseph-Désiré Mobutu seized power in the Congo. In 1966, Léopoldville was renamed Kinshasa, for a village named Kinshasa that once stood near the site, today Kinshasa (commune). The city grew rapidly under Mobutu, drawing people from across the country who came in search of their fortunes or to escape ethnic strife elsewhere, thus adding to the ethnicity and languages already found there.

In the 1990s, a rebel uprising began, which, by 1997, had brought down the regime of Mobutu. Kinshasa suffered greatly from Mobutu's excesses, mass corruption and the civil war that led to his downfall. Nevertheless, it is still a major cultural and intellectual centre for Central Africa, with a flourishing community of musicians and artists. It is also the country's major industrial centre. 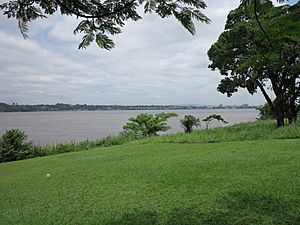 The Congo river is the second longest river in Africa after the Nile, as a waterway it provides a means of transport for much of the Congo basin; it is navigable for large river barges between Kinshasa and Kisangani, and many of its tributaries are also navigable. The river is an important source of hydroelectric power, and downstream from Kinshasa it has the potential to generate power equivalent to the usage of roughly half of Africa's population.

The older and wealthier part of the city is located on a flat area of alluvial sand and clay near the river, while many newer areas are found on the eroding red soil of surrounding hills. Older parts of the city were laid out on a geometric pattern. 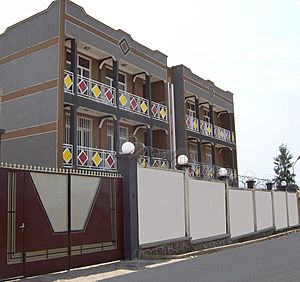 City plans of the 1920s–1950s featured a cordon sanitaire or buffer between the white and black neighborhoods, which included the central market as well as parks and gardens for Europeans.

Urban planning in post-independence Kinshasa has not been extensive. Much of the urban structure has developed without guidance from a master plan. According to UN-Habitat, the city is expanding by eight square kilometers per year. It describes many of the new neighborhoods as slums, built in unsafe conditions with inadequate infrastructure. 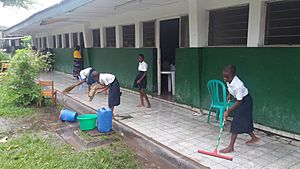 Children cleaning their classrooms in Kinshasa

Since the Second Congo War, the city has been striving to recover from disorder, with many youth gangs hailing from Kinshasa's slums. The U.S. State Department in 2010 informed travelers that Kinshasa and other major Congolese cities are generally safe for daytime travel, but to beware of robbers, especially in traffic jams and in areas near hotels and stores.

Sources say that Kinshasa is extremely dangerous, by some accounts, crime in Kinshasa is not so rampant, due to relatively good relations among residents and perhaps to the severity with which even petty crime is punished.

While the military and National Police operate their own jails in Kinshasa, the main detention facility under the jurisdiction of the local courts is the Kinshasa Penitentiary and Re-education center in Malaka. This prison houses more than double its nominal capacity of 1,000 inmates. 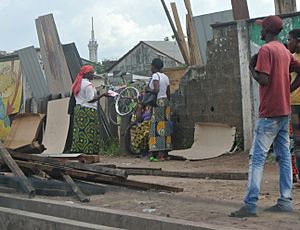 The Congolese military intelligence organization operates the Ouagadougou prison in Kintambo commune with notorious cruelty. By 2017 the population of Malaka prison was reported at 7,000–8,000. Of these, 3,600–4,600 escaped in a jailbreak in May 2017.

Street children, often orphaned, are subject to abuse by the police and military. Of the estimated 20,000 children living on Kinshasa's streets, almost a quarter are beggars, some are street vendors and about a third have some kind of employment. Some have fled from physically abusive families, notably step-parents, others were expelled from their families as they were believed to be witches, and have become outcasts. Previously a significant number were civil war orphans.

Street children are mainly boys, but the percentage of girls is increasing according to UNICEF. These children have been the object of considerable outside study. 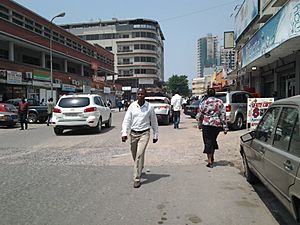 Kinshasa is the home to much of the Congo's highly educated people, including a political class which developed during the Mobutu era.

Kinshasa has a flourishing music scene which since the 1960s has operated under the patronage of the city's elite. The Orchestre Symphonique Kimbanguiste, formed in 1994, began using improved musical instruments and has since grown in means and reputation.

In 1974, Kinshasa hosted The Rumble in the Jungle boxing match between Muhammad Ali and George Foreman, in which Ali defeated Foreman, to regain the World Heavyweight title.

A pop culture ideal type in Kinshasa is the mikiliste, a fashionable person with money who has traveled to Europe. La Sape, a linked cultural trend also described as dandyism, which involves the wearing of flamboyant clothing.

All content from Kiddle encyclopedia articles (including the article images and facts) can be freely used under Attribution-ShareAlike license, unless stated otherwise. Cite this article:
Kinshasa Facts for Kids. Kiddle Encyclopedia.