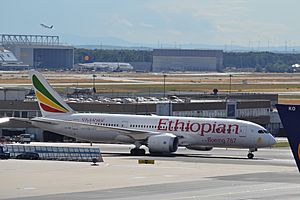 Ethiopian Airlines began on December 29, 1945. It was set up by the governments of France, the United Kingdom and United States. The government of Ethiopia later took control of the airline. It has grown to become the largest airline in that country.

All content from Kiddle encyclopedia articles (including the article images and facts) can be freely used under Attribution-ShareAlike license, unless stated otherwise. Cite this article:
Ethiopian Airlines Facts for Kids. Kiddle Encyclopedia.