Asmara is the capital city of Eritrea. It is the largest settlement in the country. Asmara has a population of about 579,000 people. Textiles and clothing, meat, beer, shoes, and ceramics are the major industrial products of the city.

Asmara grew from four villages founded in the twelfth century. It is said that there were four clans living in the Asmara area. The women of these tribes told them men to join together to fight bandits who had been attacking the area. After they defeated the bandits, a new name was given to the place, Arbaete Asmara. This name, in the Tigrinya language, meant the four females united. Arbaete was later dropped and the name was made Asmara. 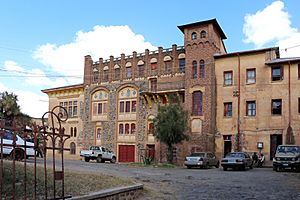 In 1889, Asmara became an Italian colony. It was made the capital of the country in 1897 and was called Asmara italiana. The city was damaged during earthquakes in 1913 and 1915. During the 1930s, the Italians made many chances to how Asmara looked. Many new buildings were created during this time.

These buildings were built in the same style as Italian buildings. This gave Asmara the look of an Italian city. Today many of the buildings and stores in Asmara still have Italian names.

During World War II, after the defeat of Italy in Africa, Asmara was under British rule. In 1952, the United Nations placed the country and Asmara under Ethiopian control. In the 1960s, the Eritrean people started fighting for independence from Ethiopia.

In July 2017 Asmara has been declared World Heritage Site by the UNESCO.

All content from Kiddle encyclopedia articles (including the article images and facts) can be freely used under Attribution-ShareAlike license, unless stated otherwise. Cite this article:
Asmara Facts for Kids. Kiddle Encyclopedia.