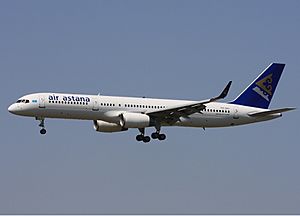 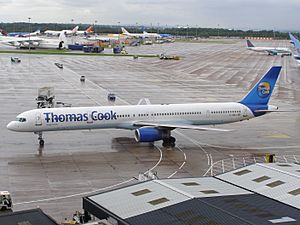 The Boeing 757 is a short to medium range narrow-body commercial passenger aircraft manufactured by Boeing Commercial Airplanes. It was launched by Eastern Air Lines and British Airways to replace the Boeing 727 and entered service in 1983. Production of the 757 ended on October 28, 2004 after 1,050 had been built. The final aircraft was delivered to Shanghai Airlines on November 28, 2005. As of July 2007, a total of 1,019 Boeing 757 aircraft were in airline service.

All content from Kiddle encyclopedia articles (including the article images and facts) can be freely used under Attribution-ShareAlike license, unless stated otherwise. Cite this article:
Boeing 757 Facts for Kids. Kiddle Encyclopedia.