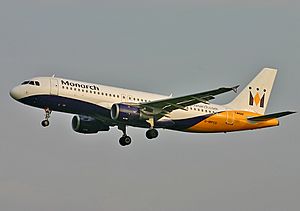 A Monarch Airlines Airbus A320 aircraft

Monarch Airlines is a budget airline which is based in the United Kingdom. It was created on 5 June 1967. Its first flight was on 5 April 1968 from Luton in England to Madrid in Spain. Monarch now flies to many different places around the world, and usually to holiday resorts.

Monarch had ordered 6 Boeing 787 aircraft which were due to be delivered in 2013. They have now cancelled their order.

All content from Kiddle encyclopedia articles (including the article images and facts) can be freely used under Attribution-ShareAlike license, unless stated otherwise. Cite this article:
Monarch Airlines Facts for Kids. Kiddle Encyclopedia.