Airbus A330 facts for kids 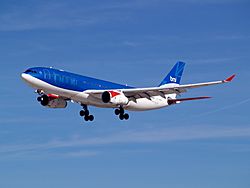 The Airbus A330 is a two engine, wide-body passenger aeroplane made by Airbus. It was designed at the same time as the Airbus A340, so it has the same body and wings.

It first flew in 1992 and the first one was delivered to Air Inter in 1994. It was a 300 series. Just after this, Airbus made the shorter 200 series. Now, Airbus has made a freighter version and a tanker version (which carries additional fuel so it can give some to other planes).

There are also 394 A330s that need to be made and given to airlines. Most of these are the smaller 200 series version.

Airlines wanted a new aeroplane to replace their McDonnell Douglas DC-10 aeroplanes which were getting old. So, Airbus started a new project in November 1987: the A330 and A340 programs. In the end, it was found that the A330 is almost 38% more fuel efficient than the DC-10.

Airbus designed the A330 to be in the market for ETOPS aeroplanes. This market already had planes like the Boeing 767. In November 2009, the A330 was the first aeroplane to get the ETOPS-240 approval, which means that the plane is allowed to fly up to 240 minutes away from any airport. This means it can fly over large oceans or places like the Antarctic where there are no airports nearby.

The A330's body and wings are nearly exactly the same as the smaller versions of the A340's wings and body, but they have different engines. The A330's body is also similar to the older Airbus A300, and the computers and systems (like the fly-by-wire system) are similar to the Airbus A320 family of aeroplanes. Also, both the A330 and A340 are built at the same place: Toulouse-Blagnac Airport in Toulouse in France.

Airbus thinks that it will keep building the A330 until at least 2015.

There are two main types of Airbus A330: the 200 series and the 300 series. There is also the freighter version, which carries cargo instead of people, and the tanker version which carries lots of fuel (usually to give to other planes).

A Middle East Airlines A330-200 lands at London Heathrow Airport.

In May 2009, Airbus said they have plans to make a version of the A330-200 that can take off with a higher weight. This is because they want to compete with Boeing and their 787-8 aircraft.

Because the Airbus A300-600F and Airbus A310F were getting old and companies had stopped ordering them, Airbus decided to make a new freighter plane to replace them. It started offering the aeroplane around the years 2000–2001. The aeroplane was talked about again at the 2006 Farnborough Airshow. Airbus got permission to sell the plane in January 2007 and the first plane came out of the factory on 20 October 2009. The aircraft first flew on 5 November 2009.

It can fly 64 tonnes of cargo over 4,000 nmi (7,400 km) or 69 tonnes over 3,200 nmi (5,930 km). The aeroplane was designed to use a new loading system that can use two different ways of holding cargo: containers or pallets (either smaller side by side pallets or larger single row pallets).

It has a new front landing gear system. Normally the A330-200 points slightly downwards when it is on the ground. This is good because the pilots can see the ground better but it makes loading the cargo harder. With this new gear, the aircraft sits straight so it is easier to load the cargo. It works by making the point where the plane attaches to the gear lower. This means that the nose has a bubble on the bottom to make sure the gear fits properly.

Airbus has 67 orders for the A330-200F. The customer who ordered the most planes is Intrepid Aviation Group who have ordered 20.

A Royal Australian Air Force A330 MRTT takes off.

This version is a tanker aircraft, which means that it carries a lot of jet fuel to give to other planes. It also has a few seats so that it can be used to carry passengers. It is used by the military.

The plane has been ordered by the Royal Australian Air Force (RAAF), the UK's Royal Air Force (RAF), the United Arab Emirates and Saudi Arabia.

The plane was also offered to the U.S. Air Force as a replacement for some of their Boeing KC-135 'Stratotankers'. Eventually in 2002, they chose Boeing's offering: the KC-767. But this order was cancelled after a lot of political controversy. In 2006, the Air Force started again. Boeing again offered the KC-767 and Airbus teamed up with Northrop Grumman to make the KC-30. This time, they chose the KC-30 and renamed it the KC-45A. But Boeing complained that the ruling was not fair and the US Government Accountability Office agreed with Boeing. The bid was cancelled again. Northrop Grumman has decided not to offer the KC-45A again.

A US Airways A330-300 landing at London Heathrow Airport

It has either two General Electric CF6-80E engines, two Pratt & Whitney PW4000 engines or two Rolls Royce Trent 700 engines. All the engines are ETOPS rated at ETOPS-180 which means that the A330-300 can fly up to 180 minutes away from an airport that it can land at.

The A330 has had ten accidents: two hull-loss accidents (crashes where the plane cannot be fixed and cannot be used any more). There has been a total of 235 fatalities in the accidents.

All content from Kiddle encyclopedia articles (including the article images and facts) can be freely used under Attribution-ShareAlike license, unless stated otherwise. Cite this article:
Airbus A330 Facts for Kids. Kiddle Encyclopedia.