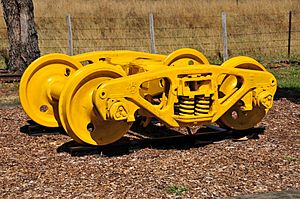 A bogie detached from a railway wagon

A bogie (called a truck in North American English) is a chassis, with wheels, attached to a rail vehicle, such as a boxcar. A bogie usually has four or six wheels. Each rail vehicle has a pair of bogies. The bogies can turn slightly to allow the rail vehicle to pass easily around curves in the railway track.

All content from Kiddle encyclopedia articles (including the article images and facts) can be freely used under Attribution-ShareAlike license, unless stated otherwise. Cite this article:
Bogie Facts for Kids. Kiddle Encyclopedia.