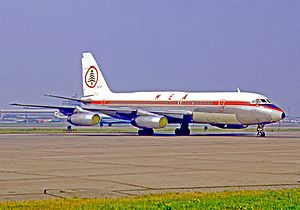 Middle East Airlines (Arabic: طيران الشرق الأوسط‎code: ar is deprecated ) is an airline based in Lebanon. It flies between the Middle East, Europe and Africa. 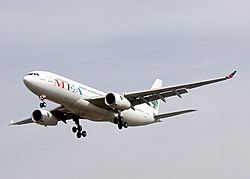 Middle East Airlines opened for business on May 31, 1945. It was opened by Saeb Salam, with support from BOAC. MEA's work started on January 1, 1946 with flights between Beirut and Nicosia. Then its airplanes started to fly to Iraq, Egypt, Syria, and Cyprus. The company bought two Douglas DC-3 planes in mid-1946. 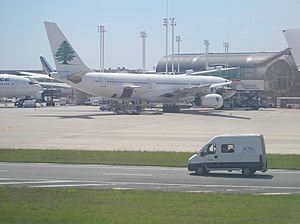 An MEA Airbus A330-200 at Roissy Airport in France

Middle East Airlines flies its planes to these countries and their cities (since June 2006):

All content from Kiddle encyclopedia articles (including the article images and facts) can be freely used under Attribution-ShareAlike license, unless stated otherwise. Cite this article:
Middle East Airlines Facts for Kids. Kiddle Encyclopedia.