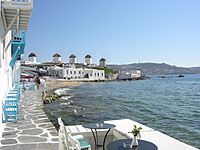 A plan from Chora of Mykonos

Mykonos is a very touristic Greek island. It belongs to Cyclades. It is in the north of Cyclades, near Syros and Tinos islands. The area of the island is 85 square kilometres. 9,320 people live there. Most of them work in the tourist industry. The island is famous mainly for its nightlife. Also, the island has many beautiful beaches, with yellow sand. Along the beaches there are bars and cafes, so the entertainment continues during day. The island has two main settlements. Chora, the capital of the island, is in the west and Ano Mera, the second settlement is in the center. 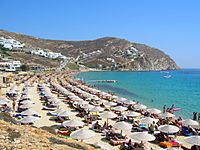 A beach of Mykonos

Mykonos' houses have got the distinguished Cycladic architecture. The houses have a cubic scheme, with wooden windows, and doors, painted usually with intense colours. The alleys are painted with lime, so they have a bright white colour. Mykonos is very close to the islet Delos. Delos was very important in antiquity. It was the center of Delian League, the leaders of which were ancient Athenians. In Delos there was an important sanctuary for Apollon, one of twelve Greek gods. Delos today is a very important archaeological site and the visitors go there from Mykonos. Mykonos has many old traditional windmills, which are everywhere on the island

All content from Kiddle encyclopedia articles (including the article images and facts) can be freely used under Attribution-ShareAlike license, unless stated otherwise. Cite this article:
Mykonos Facts for Kids. Kiddle Encyclopedia.