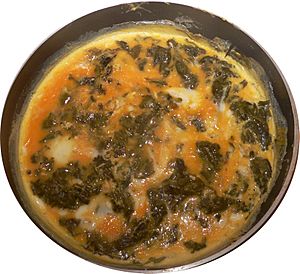 An omelette or omelet is a type of food that is mainly eggs, with various fillings. In the United States "omelets" are usually eaten at breakfast. However omelettes can be eaten as a light lunch or late evening meal.

An omelette is prepared from beaten eggs cooked with butter or oil in a frying pan. A thin, flat 'heavy' omelette is usually folded around a filling such as cheese, vegetables, meat, or some combination of these ingredients. In some traditions, omelettes are fried to cook the bottom and then flipped over or in half for final stage of cooking. However, in other traditions, omelettes is baked to cook it evenly or the top is cooked under a broiler. When making an omelette, it is best to use several eggs. Put a little water in with the eggs when you mix them up because the water helps the eggs to produce steam as they cook. The steam makes them lighter and fluffier. Using oil in the bottom of a nonstick omelette pan helps prevent the omelette from sticking. Follow these tips, add your favourite filling, and you will make a tasty omelette quickly and easily.

For a full light and fluffy omolette separate the egg whites and whisk to stiff peaks then fold in the yolks. Cook by frying in a knob of butter on a medium heat until centre starts to dry then fold in half and cook until its hot in the middle.

There are many different types of omelette, often with different names, depending on what is used as a filling.

Arnold Bennett (27 May 1867 - 27 March 1931) was a British writer. Often after having been to the theatre in London he visited the Savoy Hotel's Grillroom. The chef added haddock, cream and Parmesan cheese to the basic omelette and called the new dish "Omelette Arnold Bennett" in his customer's honour.

When Napoleon Bonaparte and his army were marching through southern France, they stopped for the night near the town of Bessieres. A local innkeeper made Napoleon an omelette. Napoleon was so impressed by the cooking he ordered the townspeople to collect all the eggs in the village and to prepare a huge omelette for his army the next day.

All content from Kiddle encyclopedia articles (including the article images and facts) can be freely used under Attribution-ShareAlike license, unless stated otherwise. Cite this article:
Omelette Facts for Kids. Kiddle Encyclopedia.