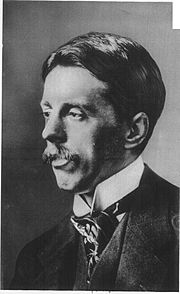 He started as a journalist, and during World War I was in charge of propaganda in France.

Bennett was born in Hanley in the Potteries district of Staffordshire, and his best known books were about life in this area. He changed the names of the five towns in the district, but their names are easy to recognise.

All content from Kiddle encyclopedia articles (including the article images and facts) can be freely used under Attribution-ShareAlike license, unless stated otherwise. Cite this article:
Arnold Bennett Facts for Kids. Kiddle Encyclopedia.