Burslem ( BURZ-ləm) is one of the six towns that along with Hanley, Tunstall, Fenton, Longton and Stoke-upon-Trent form part of the city of Stoke-on-Trent in Staffordshire, England. It is often referred to as the "mother town" of Stoke on Trent.

Burslem is sited on the eastern ridge of the Fowlea Valley, the Fowlea being one of the main early tributaries of the River Trent. Burslem embraces the areas of Middleport, Dalehall, Longport, Westport, Trubshaw Cross, and Brownhills. The Trent & Mersey Canal cuts through, to the west and south of the town centre. A little further west, the West Coast Main Line railway and the A500 road run in parallel, forming a distinct boundary between Burslem and the neighbouring town of Underlem (Newcastle-under-Lyme). To the south is Grange Park and Festival Park, reclaimed by the Stoke-on-Trent Garden Festival.

The Domesday Book shows Burslem (listed as Bacardeslim) as a small farming hamlet; strategically sited above a vital ford (crossing) at Longport, part of the major pack horse track out of the Peak District and Staffordshire Moorlands to the Liverpool/London road. As far back as the late 12th century a thriving pottery industry existed, based on the fine & abundant local clays. After the Black Death, Burslem emerges in the records as a medieval town - the 1536 stone church is still standing and in use. Until the mid-1760s Burslem was relatively cut off from the rest of England; it had no navigable river nearby, and there were no good & reliable roads. By 1777 the Trent and Mersey Canal was nearing completion, and the roads had markedly improved. The town boomed on the back of fine pottery production & canals, and became known as 'The Mother Town' of the six towns that make up the city. In 1910 the town was federated into the county borough of Stoke-on-Trent, and the borough was granted city status in 1925.

Many of the novels of Arnold Bennett evoke Victorian Burslem, with its many potteries, mines, and working canal barges. The Burslem of the 1930s to the 1980s is evoked by the paintings and plays of Arthur Berry.

Burslem contains Britain's last real working industrial district (i.e.: where people live within walking distance of the factories of a single heavy industry - in this case, the potteries); and thus much of the nineteenth-century industrial heritage, buildings & character have survived intact. 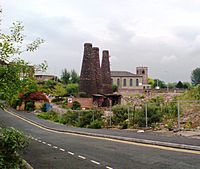 A recent report suggested the concentration of pottery-based heritage makes the area the richest stretch of canal for industrial heritage in England.

At the 1991 census count, the population of Burslem was 21,400. A study by consultants Atkins, working from the United Kingdom Census 2001 data, showed that the Burslem population is steady and has not declined despite a manufacturing decline during the 1980s and '90s.

Heavy industrial employment (mines, steel and pots) has left a legacy of ill-health among many older people, but there is the Haywood Hospital (High Lane, Burslem) and the new £300-million University Hospital of North Staffordshire is just three miles away by road.

Burslem is a multicultural area of Stoke-on-Trent with a significant Asian population. 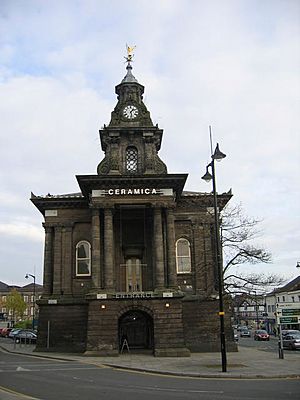 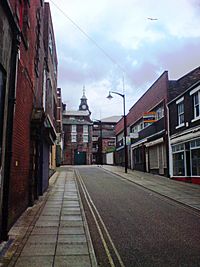 Clayhanger Street, Burslem, by the side of the Wedgwood Institute showing the clock tower of Burslem Town Hall in the background, May 2008

Around 5 million tourists visit Stoke-on-Trent each year, supporting around 4,400 direct jobs. Stoke shows its popularity through the number of repeat visits; around 80 percent of visitors have previously been here. Burslem has a variety of strong tourist attractions; Burleigh, Moorcroft, Festival Park, its many pubs, and the Trent & Mersey Canal. Ceramica is one of the largest buildings in Burslem, and was once the town hall.

It also has the legacy of novelist Arnold Bennett, who refers to the town and many of its streets with thinly disguised names: e.g. Burslem/"Bursley", Swan (Square and Pub)/"Duck". It is the setting for one of his most famous works, the Clayhanger trilogy. Burslem's centre benefits from having an almost-intact medieval street-plan and countless fine old buildings, and a townscape which almost-totally escaped re-development during the 1960s and 1970s.

After being under-used for years, the Burslem School of Art has been refurbished at a cost of £2.1m and offers several large free art galleries. The free Public Library is currently based in the School of Art, after the Venetian Gothic Wedgwood Institute closed for safety reasons early in 2009. Ceramica was a new award-winning ceramics family attraction, based in the imposing old Town Hall and funded by Millennium Lottery money but due to the loss of council funding has been closed. The Queen's Theatre has regular concerts and an annual pantomime.

There is a traditional Friday street market, and street carnivals in May and December.

The town is elevated and is not prone to flooding.

Burslem has a Victorian park designed by Thomas Hayton Mawson, and a large amount of reclaimed green space, such as the Westport Lakes and the later legacy of the 1986 National Garden Festival, which imaginatively reclaimed part of the Shelton Bar steelworks site. The Peak District National Park begins just ten miles north-east of Burslem.

The nearby A500 gives access to the M6 motorway. Longport railway station offers direct connections south into Stoke, east to Derby and Nottingham, and north to Crewe and Manchester. The town is straddled by two major off-road cycle paths, part of the National Cycle Network.

The nearest international airports are Manchester and Birmingham; each is about 60 minutes away by train.

Burslem railway station which was opened by the North Staffordshire Railway opened on 1 November 1873 on the Potteries Loop Line. It closed in the 1960s and the site and trackbed are now a greenway.

The film adaptation of Arnold Bennett's The Card was partly filmed on location in the town.

Robbie Williams included the song "Burslem Normals"' on his album Rudebox, released in 2006. A short film, "Goodbye to the Normals" was made.

A song "Waterloo Road" performed by Jason Crest was written (by Mike Deighan and Mike Wilsh) about the Waterloo Road in Burslem. The song became very popular and even reached no. 1 in France when the French singer Joe Dassin covered it under the title "Les Champs Élysées".

The guitarist Slash, the former lead guitarist of Guns N' Roses, was also an inhabitant of Stoke-on-Trent in his early years. Ian Fraser Kilmister, known as Lemmy, was an English musician, singer and songwriter who founded and fronted the rock band Motörhead.

Industrial scale pottery production has drastically declined since the 1970s; but specialist makers (Steelite) and smaller producers of high-value ceramics (Burleigh, Wade, Moorcroft) are thriving. Burslem is emerging as a centre for small, freelance creative businesses working in sectors such as fine art, animation and crafts as well as pottery.

The number of shops in the town centre have markedly declined, hit by the impact of nearby out-of-town retail parks that offer free parking. However, the evening economy is still active with a wide range of bars and restaurants mainly serving English and Indian food.

The Leopard Inn is a listed building in Burslem, it is steeped in history and the discovery of tunnels and 58 bedrooms that have been left exactly as they were when they were sealed between the 1930s and 1950s. The Leopard Inn dates from the early 1700s. Initially a coaching house and Inn, there has been a working pub on this site for 300 years or more. In 1878 a three-storey extension including 57 rooms were built. The ambition was to create in Burslem 'The Savoy of the North'. The rooms to the front of the Leopard are today in use as a pub and restaurant, and to the rear the hotel lies abandoned and purportedly haunted.

At Spring 2002 unemployment was 4.1% or 1,526 people in the Stoke-on-Trent North constituency; almost the same rate as the West Midlands as a whole. In Burslem at 2001 unemployment was 3.2% and declining.

In 2005, the building of business park units in the town. Further business parks are planned for 2006/7 just to the north in Chatterley Valley, and the south in Etruria Valley.

In 2019 it was reported that the town's last bank had closed, leaving the town without any free to use cash machines, making it the first large town in the UK without one.

In 2007 a social enterprise newspaper, Local Edition, become one of the first newspapers to cover the area regularly. The newspaper covered Burslem, as well as surrounding areas including Tunstall, Middleport and Cobridge, giving a voice to the people in the community. The newspaper ceased publication in 2008 and its archive is online.

Near to the town is Burslem Golf Club, a 9-hole course which once had singer Robbie Williams as a Junior Captain. It was opened on 28 September 1907 by vaudeville entertainer and golfer Sir Harry Lauder. On 29 September 2007 his great-nephew Gregory Lauder-Frost as guest-of-honour rededicated it for another century in a formal ceremony.

Burslem is the site of one of the two campuses of Stoke-on-Trent College; the College states that it is the largest Further Education college in Stoke and North Staffordshire. The campus specialises in media-production and drama. Stoke Studio College, a studio school for 13- to 19-year-olds opened at the college campus in September 2013.

Within a six-mile radius from Burslem there are three universities; Staffordshire at Shelton, Keele University, and Manchester Metropolitan's large Art & Design campus at Alsager.

Burslem's most famous sons include the potter Josiah Wedgwood, the watercolour painter James Holland (1800–1870), Ian "Lemmy" Kilmister, the founder, bassist and lead singer of Motörhead, and Robbie Williams, who was a major shareholder in Port Vale and whose family are still resident in the area. Darts legend and 16-time world champion Phil Taylor was born, raised and also worked in the town.

In the 17th century, Molly Leigh was resident of the town, she was accused of being a witch before her death in 1748. Painter James Astbury Hammersley also came from Burslem.

William Clowes, one of the founders of Primitive Methodism, was born in Burslem as was John Bennett the potter. Sarah Benett (1850–1924), the Suffragette, member of the WSPU and social reformer lived in Burslem from 1894.

William Boulton's Providence Works and Foundry was based in Burslem, which designed and made the machinery that revolutionised the pottery industry in the second half of the 19th century.

All content from Kiddle encyclopedia articles (including the article images and facts) can be freely used under Attribution-ShareAlike license, unless stated otherwise. Cite this article:
Burslem Facts for Kids. Kiddle Encyclopedia.