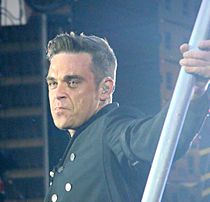 Williams performing in Take That’s Progress Live tour in 2011. He rejoined the group in July 2010 and is open to another reunion in the future. 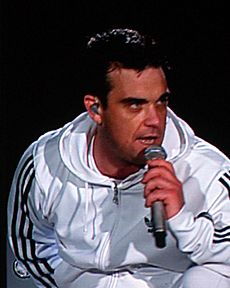 Williams at a concert in Vienna, Austria in 2006 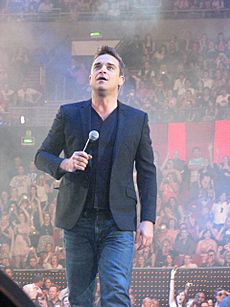 Williams performing at the Sydney Super Dome in 2009 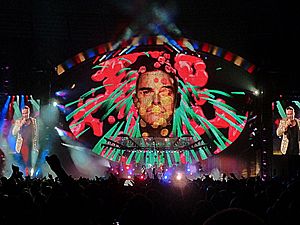 Williams on stage at the Etihad Stadium in Manchester during the Take the Crown Stadium Tour, June 2013

Robert Peter "Robbie" Williams (born 13 February 1974) is an English singer and occasional actor. In the United Kingdom, he has sold more albums than any other British singer. He has sold more than 70 million records worldwide.

Williams performed his first songs in 1990, with the group Take That. In 1995, he left Take That to start playing and writing music on his own. On 15 July 2010, he rejoined Take That. The group released a new album in November 2010. It became the second fastest-selling album of all-time in UK chart history and the fastest-selling record of the century.

After he left Take That, Williams' first record was the song "Freedom", which was written by George Michael. His first album was called "Life Thru a Lens". It was first sold in September 1997. At this time, Williams had many problems with alcohol and depression. "Angels", a song from his first album, became his most famous song. Because "Angels" was so successful, the album "Life Thru a Lens" became much more popular, and he sold more than three million copies of it in Europe.

Williams wrote "Millennium", which was a song based on the music from the James Bond films, for his second album, "I've Been Expecting You". "Millennium" became his first Number One in the charts. Two more songs from the same album, "No Regrets" (which Williams wrote with Neil Tennant and Neil Hannon) and "Strong", were both successful in the United Kingdom. Another song from this album, "She's The One", also became a number One song.

Williams was not very successful outside Europe until he made the album "Sing When You're Winning", which was first sold in August 2000. The song "Rock DJ" won many awards: for example, it was called "Best Single (song) Of The Year" at the BRIT Awards, and MTV gave Robbie Williams an award for the special effects in the video. At this time, Robbie Williams recorded a duet, "Kids", with Kylie Minogue. Many of his songs, for example, "Supreme" and "Better Man", became popular in many different countries.

In 2001, Williams recorded covers (copies) of several songs that had been performed earlier by Frank Sinatra. One of these songs was a duet with Nicole Kidman, called "Somethin' Stupid". Later in 2001, he began to sell the album "Swing When You're Winning". The album became successful very quickly. Altogether he sold 7 million copies. A song from the album, "Beyond the Sea", was used at the end of the film "Finding Nemo". At this time, he also recorded a song he had written, "Eternity", which was not on any albums. It was very successful and became a Number One song.

In 2002, Williams signed a contract to say he would work for the company EMI. He worked on his next album, "Escapology", for a year. Many people think that "Escapology" was different from Williams' earlier music. The album was very successful in Europe, but it was not so successful in America. For the video for the song "Something Beautiful", Robbie ran a competition. The winner of the competition pretended to be Williams in the video. In the end, he chose three winners, so he made three different videos for the song.

In 2004, Williams put his most popular songs together. He called this collection "Greatest Hits". There were also some new songs on this album, for example, "Radio".

In February 2005, the BRIT Awards TV show asked people to vote to answer the question "What was the best song between 1980 and 2005?" The winner was "Angels" by Williams.

In October 2005, Williams' sixth album, "Intensive Care", was first sold. Williams and Steven Duffy wrote the songs for this album. At this time, four of the singers from Take That went to London for a TV show. They asked Williams to come, but he said he did not want to come to London with them. The newspaper The Sunday Mirror said that the other singers were "gutted" (very unhappy and disappointed) because Williams would not come.

In 2006, Williams started to perform at concerts all over the world. He recorded his new song, "Rudebox", which was very different from his other songs. Many people did not like it, and the newspaper The Sun said that "Rudebox" was "the worst song ever". The song was quite successful, but the album, which was also called "Rudebox", sold fewer copies than any of Williams' other albums.

Williams worked with Guy Chambers and Mark Ronson for his next album, Reality Killed the Video Star. The album was released on 9 November 2009 in the United Kingdom.

On 11 October 2009 Williams published a 12-track compilation album, titled Songbook. It was a free CD for the newspaper The Mail on Sunday. The CD is a one-off album of some of his biggest hits - including several rare live performances.

In October 2010 Williams released his second greatest hits album, In and Out of Consciousness: The Greatest Hits 1990–2010, to celebrate 20 years as a performing artist.

In June 2011 Robbie Williams said he was working with Gary Barlow on a new solo album.

He was the opening act at the Diamond Jubilee concert held outside Buckingham Palace on 4 June 2012.

Williams' ninth album Take the Crown was released on 5 November 2012.

On 15 November 2013 Williams' tenth album Swings Both Ways was released.

Williams lives in Los Angeles, in California. He has often said that he likes Los Angeles because he can feel free and private. Williams moved back to the UK in 2009. He bought an £8.5 million mansion in Compton Bassett, Wiltshire. It was nearby to close friend Jonathan Wilkes who lives in Swindon. Williams sold the mansion a year later to move back to Los Angeles.

He often has problems with alcohol, drugs and mental illness. He has often visited special hospitals to cure his addiction to alcohol and drugs.

On 7 August 2010, Williams and long time girlfriend, actress Ayda Field, married at his home in Los Angeles. On 30 March 2012 Williams said that he and his wife would become parents for the first time. Their daughter Theodora Rose was born on September 18, 2012.

All content from Kiddle encyclopedia articles (including the article images and facts) can be freely used under Attribution-ShareAlike license, unless stated otherwise. Cite this article:
Robbie Williams Facts for Kids. Kiddle Encyclopedia.