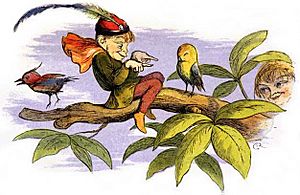 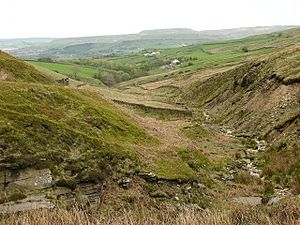 Alden Valley, Lancashire, possibly a place once associated with elves

An elf is a creature of various origins that is usually regarded as a good being that helps to make trees and nature good. It is therefore commonly associated with paganism and witchcraft (many modern witches today believe that elves are real creatures).

Elves are usually described as a taller human, but with more firmer touch to them. However, in The Lord of the Rings, elves were described as human sized (and if anything taller), hence changing the description of elves. They are sometimes known to have long, pointy ears.

In most modern fantasy scenarios, elves are one of the 3 main races (elves, dwarves, and humans), although if these 3 are described as the good races, they then become one of 6 races, including orcs, goblins, trolls, and / or giants.

The word elf is found throughout the Germanic languages and seems originally to have meant "white being". Reconstructing the early concept of an elf depends largely on texts, written by Christians, in Old and Middle English, medieval German, and Old Norse. These associate elves variously with the gods of Norse mythology, with causing illness, with magic, and with beauty and seduction. 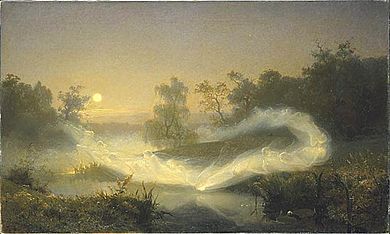 The elves of Norse mythology have survived into folklore mainly as females, living in hills and mounds of stones. The Swedish älvor were stunningly beautiful girls who lived in the forest with an elven king.

The elves could be seen dancing over meadows, particularly at night and on misty mornings. They left a circle where they had danced, which were called älvdanser (elf dances) or älvringar (elf circles), and to urinate in one was thought to cause diseases. Typically, elf circles were fairy rings consisting of a ring of small mushrooms, but there was also another kind of elf circle. In the words of the local historian Anne Marie Hellström:

...on lake shores, where the forest met the lake, you could find elf circles. They were round places where the grass had been flattened like a floor. Elves had danced there. By Lake Tisnaren, I have seen one of those. It could be dangerous and one could become ill if one had trodden over such a place or if one destroyed anything there.

If a human watched the dance of the elves, he would discover that even though only a few hours seemed to have passed, many years had passed in the real world. Humans being invited or lured to the elf dance is a common motif transferred from older Scandinavian ballads.

Elves were not exclusively young and beautiful. In the Swedish folktale Little Rosa and Long Leda, an elvish woman (älvakvinna) arrives in the end and saves the heroine, Little Rose, on condition that the king's cattle no longer graze on her hill. She is described as a beautiful old woman and by her aspect people saw that she belonged to the subterraneans. 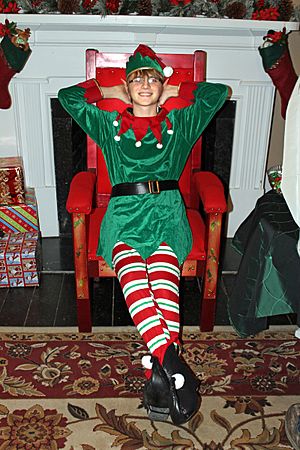 A person dressed as a Christmas Elf, Virginia 2016.

With industrialisation and mass education, traditional folklore about elves waned, but as the phenomenon of popular culture emerged, elves were reimagined, in large part on the basis of Romantic literary depictions and associated medievalism.

As American Christmas traditions crystallized in the nineteenth century, the 1823 poem "A Visit from St. Nicholas" (widely known as "'Twas the Night before Christmas") characterized St Nicholas himself as "a right jolly old elf". However, it was his little helpers, inspired partly by folktales like The Elves and the Shoemaker, who became known as "Santa's elves"; the processes through which this came about are not well understood, but one key figure was a Christmas-related publication by the German-American cartoonist Thomas Nast. Thus in the US, Canada, UK, and Ireland, the modern children's folklore of Santa Claus typically includes small, nimble, green-clad elves with pointy ears, long noses, and pointy hats, as Santa's helpers. They make the toys in a workshop located in the North Pole. The role of elves as Santa's helpers has continued to be popular, as evidenced by the success of the popular Christmas movie Elf.

Typical illustration of a female elf in the high fantasy style.

The fantasy genre in the twentieth century grew out of nineteenth-century Romanticism, in which nineteenth-century scholars such as Andrew Lang and the Grimm brothers collected fairy-stories from folklore and in some cases retold them freely.

A pioneering work of the fantasy genre was The King of Elfland's Daughter, a 1924 novel by Lord Dunsany. The Elves of Middle-earth played a central role in Tolkien's legendarium, notably The Silmarillion and The Lord of the Rings; this legendarium was enormously influential on subsequent fantasy writing. Tolkien's writing had such influence that in the 1960s and afterwards, elves speaking an elvish language similar to those in Tolkien's novels became staple non-human characters in high fantasy works and in fantasy role-playing games. Post-Tolkien fantasy elves (which featured not only in novels but also role-playing games such as Dungeons & Dragons) are often portrayed as being wiser and more beautiful than humans, with sharper senses and perceptions as well. They are said to be gifted in magic, mentally sharp and lovers of nature, art, and song. They are often skilled archers. A hallmark of many fantasy elves is their pointed ears.

In works where elves are the main characters, such as The Silmarillion or Wendy and Richard Pini’s comic book series Elfquest, elves exhibit a similar range of behaviour to a human cast, distinguished largely by their superhuman physical powers. However, where narratives are more human-centered, as in The Lord of the Rings, elves tend to sustain their role as powerful, sometimes threatening, outsiders. Despite the obvious fictionality of fantasy novels and games, scholars have found that elves in these works continue to have a subtle role in shaping the real-life identities of their audiences. For example, elves can function to encode real-world racial others in video games, or to influence gender-norms through literature.

All content from Kiddle encyclopedia articles (including the article images and facts) can be freely used under Attribution-ShareAlike license, unless stated otherwise. Cite this article:
Elf Facts for Kids. Kiddle Encyclopedia.