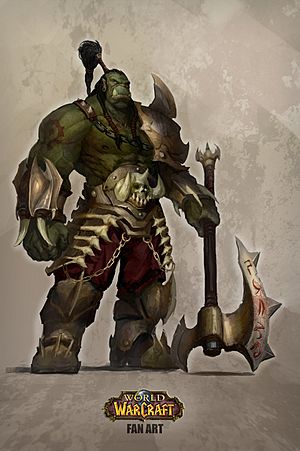 An Orc is a mythical creature. In the 20th century, J. R. R. Tolkien gave orcs their traits: they are servitors of evil and small creatures. The word can probably be traced to Orcus. This is a different name for Pluto or Hades. Pliny the Elder writes about orcs in his Naturalis historia. They are long-toothed sea monsters. Ludovico Ariosto (1474-1533)wrote an epic Orlando Furioso: There, the virgin Angelica is captured by a sea monster called orc. The hero, Rogero, is able to free her as he rode a Hippogriff. The Latin name of the Killer Whale, Orcinus orca is likely to come from that story. There is another creature called orc in Orlando Furioso: a blind man-eating giant who abducts King Norandin of Damascus and his lover Lucina. This orc cannot be vanquished; only fooled by trickery.

There is another Orc that lives in the Alps. It is a demon living on mountain tops. It sometimes is described as protector of the forest. At other times it is said to be an evil spirit who brings doom to cattle and wild beasts.

From the early Middle Ages, the orc was seen as an evil creature, much like other creatures of Celtic origin.

All content from Kiddle encyclopedia articles (including the article images and facts) can be freely used under Attribution-ShareAlike license, unless stated otherwise. Cite this article:
Orc Facts for Kids. Kiddle Encyclopedia.