James Patrick Page (born 9 January 1944) is an English musician, songwriter, and record producer who achieved international success as the guitarist and founder of the rock band Led Zeppelin.

Page began his career as a studio session musician in London and, by the mid-1960s, alongside Big Jim Sullivan, was one of the most sought-after session guitarists in Britain. He was a member of the Yardbirds from 1966 to 1968. In late 1968, he founded Led Zeppelin.

Page is widely considered to be one of the greatest and most influential guitarists of all time. Rolling Stone magazine has described Page as "the pontiff of power riffing" and ranked him number 3 in their list of the "100 Greatest Guitarists of All Time". In 2010, he was ranked number two in Gibson's list of "Top 50 Guitarists of All Time" and, in 2007, number four on Classic Rocks "100 Wildest Guitar Heroes".

Page was born to James Patrick Page and Patricia Elizabeth Gaffikin in the west London suburb of Heston on 9 January 1944. In 1952, his family moved to Feltham and then to Miles Road, Epsom in Surrey, which is where Page came across his first guitar. "I don't know whether [the guitar] was left behind by the people [in the house] before [us], or whether it was a friend of the family's—nobody seemed to know why it was there." First playing the instrument at age 12, he took a few lessons in nearby Kingston, but was largely self-taught. 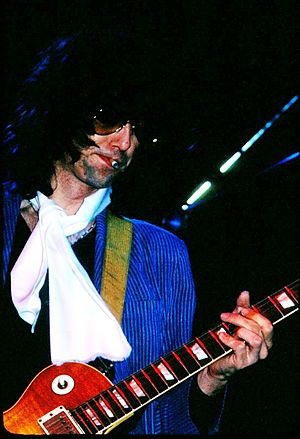 Among Page's early influences were rockabilly guitarists Scotty Moore and James Burton, who both played on recordings made by Elvis Presley. Presley's song "Baby Let's Play House" is cited by Page as being his inspiration to take up the guitar. Although he appeared on BBC1 in 1957 with a Höfner President, Page states that his first guitar was a second-hand 1959 Futurama Grazioso, later replaced by a Fender Telecaster.

Page's musical tastes included skiffle (a popular English music genre of the time) and acoustic folk playing, and the blues sounds of Elmore James, B.B. King, Otis Rush, Buddy Guy, Freddie King and Hubert Sumlin. "Basically, that was the start: a mixture between rock and blues." 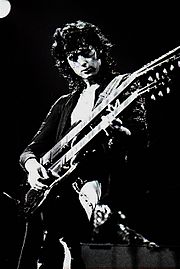 Led Zeppelin is one of the best-selling music groups in the history of audio recording. Various sources estimate the group's worldwide sales at more than 200 or even 300 million albums. With 111.5 million RIAA-certified units, they are the second-best-selling band in the United States. Each of their nine studio albums reached the top 10 of the US Billboard album chart, and six reached the number-one spot.

Led Zeppelin were the fore bearers of heavy metal and hard rock, and their sound was largely the product of Page's input as a producer and musician. The band's individualistic style drew from a wide variety of influences. They performed on multiple record-breaking concert tours.

Led Zeppelin broke up in 1980 following the death of Bonham at Page's home. Page initially refused to touch a guitar, grieving for his friend. For the rest of the 1980s, his work consisted of a series of short-term collaborations in the bands the Firm, the Honeydrippers, reunions and individual work, including film soundtracks. He also became active in humanitarian work.

All content from Kiddle encyclopedia articles (including the article images and facts) can be freely used under Attribution-ShareAlike license, unless stated otherwise. Cite this article:
Jimmy Page Facts for Kids. Kiddle Encyclopedia.