Geoffrey Arnold Beck (born 24 June 1944) is an English rock guitarist. He is one of the three noted guitarists to have played with The Yardbirds (the other two being Eric Clapton and Jimmy Page). Beck also formed The Jeff Beck Group and with Tim Bogert and Carmine Appice he formed Beck, Bogert & Appice.

Much of Beck's recorded output has been instrumental, with a focus on new sounds, and his releases have spanned genre ranging from blues rock, hard rock, and an additional blend of guitar-rock and electronica. Although he recorded two hit albums (in 1975 and 1976) as a solo act, Beck has not established or maintained the commercial success of many of his contemporaries and bandmates.

He was ranked fifth in Rolling Stone's list of the "100 Greatest Guitarists of All Time" and the magazine, upon whose cover Beck has appeared three times, has described him as "one of the most influential lead guitarists in rock". He is often called a "guitarist's guitarist".

Beck has earned wide critical praise and received the Grammy Award for Best Rock Instrumental Performance six times and Best Pop Instrumental Performance once. In 2014 he received the British Academy's Ivor Novello Award for Outstanding Contribution to British Music. Beck has been inducted into the Rock and Roll Hall of Fame twice: as a member of the Yardbirds (1992) and as a solo artist (2009). 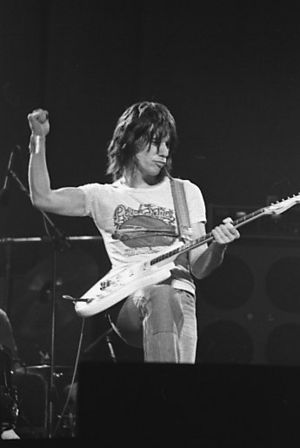 Geoffrey Arnold Beck was born at 206 Demesne Road, Wallington, England. As a 10-year-old, Beck sang in a church choir. He attended Sutton Manor School. As a teenager he learned to play on a borrowed guitar and made several attempts to build his own instrument, first by gluing and bolting together cigar boxes for the body and an unsanded fence-post for the neck with model aircraft control-lines and frets simply painted on.

Beck has cited Les Paul as the first electric guitar player who impressed him, he has said that he first heard an electric guitar when he was 6 years old and heard Paul playing "How High the Moon" on the radio. Upon leaving school he attended Wimbledon College of Art, after which he was briefly employed as a painter and decorator, a groundsman on a golf course and a car paint-sprayer. Beck's sister introduced him to Jimmy Page when both were teenagers.

Beck has been married to Sandra Beck since 2005 and has been a vegetarian since 1969. He is a patron of the Folly Wildlife Rescue Trust. He has an interest in classic Ford hot rods, performing much of the work on the exteriors and engines of the cars by himself. Beck has a house near Wadhurst, East Sussex. 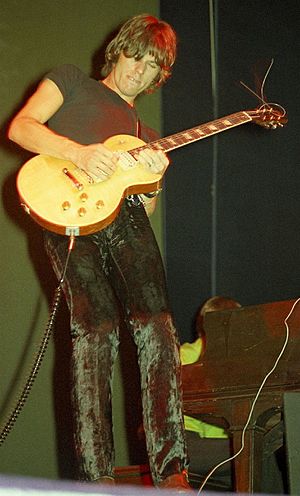 All content from Kiddle encyclopedia articles (including the article images and facts) can be freely used under Attribution-ShareAlike license, unless stated otherwise. Cite this article:
Jeff Beck Facts for Kids. Kiddle Encyclopedia.