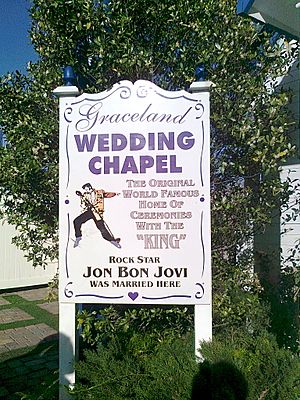 Graceland Wedding Chapel, where Jon Bon Jovi married Dorothea Hurley. The chapel has used it as a claim to fame ever since

John Francis Bongiovi Jr. (born March 2, 1962), known professionally as Jon Bon Jovi, is an American singer-songwriter, record producer, philanthropist, and actor. Bon Jovi is best known as the founder and frontman of the rock band Bon Jovi, which was formed in 1983.

Bon Jovi has released 2 solo albums and 12 studio albums with his band, which to date have sold over 130 million albums worldwide, thus making them one of the world's best-selling music artists. In the 1990s, Bon Jovi started an acting career, starring in various movie roles and has made several TV appearances in various series.

As a songwriter, Bon Jovi was inducted into Songwriters Hall of Fame in 2009. In 2012, Bon Jovi ranked #50 on the list of Billboard Magazine's "Power 100", a ranking of "The Most Powerful and Influential People In The Music Business". In 1996, People Magazine named him one of the "50 Most Beautiful People In The World". Bon Jovi was ranked #31 on the "Top 100 Heavy Metal Vocalists" list by Hit Parader.

John Francis Bongiovi Jr. was born in Perth Amboy, New Jersey, the son of two former Marines, barber John Francis Bongiovi Sr. and florist Carol (Sharkey). He has two brothers, Anthony and Matthew. His father was of Italian (from Sciacca, Sicily) and Slovak ancestry and his mother is of German and Russian descent. He has stated that he is a blood relative of singer Frank Sinatra.

Bon Jovi was raised Catholic. He spent summers in Erie, Pennsylvania, with his grandparents, and sold newspapers. As a child, John attended St. Joseph High School, in Metuchen, New Jersey, during his freshman and sophomore years. He later transferred to Sayreville War Memorial High School in Parlin, New Jersey.

He spent most of his adolescence skipping school to opt for music activities instead, and ended up playing in local bands with friends and his cousin Tony Bongiovi, who owned the then-famous New York City recording studio The Power Station. As a result, his academic records displayed poor grades. By the time he was 16, John Bongiovi was playing clubs. It was not long before he joined up with keyboardist David Bryan, who played with him in a ten-piece rhythm and blues band called Atlantic City Expressway. He also performed with bands called The Rest, The Lechers and John Bongiovi and the Wild Ones.

When he was seventeen, Jon Bon Jovi was working sweeping floors at his cousin Tony Bongiovi's recording studio. In 1980, when Meco was there recording Christmas in the Stars: The Star Wars Christmas Album, Tony Bongiovi recommended him for the song "R2-D2 We Wish You A Merry Christmas", which became his first professional recording (credited as John Bongiovi).

During a stop in Los Angeles on The New Jersey Syndicate Tour in 1989, Bon Jovi secretly took a trip to Las Vegas, and married his high school sweetheart, Dorothea Hurley (born September 29, 1962), on April 29 at the Graceland Wedding Chapel. The couple has four children.

A former resident of Rumson, New Jersey, he established his Sanctuary Sound recording studio in the basement of his home there.

In 2004, he became founder and primary owner of the Philadelphia Soul of the Arena Football League. He appeared in several television commercials for the league, typically with John Elway, Hall of Fame quarterback for the Denver Broncos. Bon Jovi is no longer part owner of the Soul. In 2011, Bon Jovi expressed interest in purchasing 15% of the Atlanta Falcons for 150 million dollars.

All content from Kiddle encyclopedia articles (including the article images and facts) can be freely used under Attribution-ShareAlike license, unless stated otherwise. Cite this article:
Jon Bon Jovi Facts for Kids. Kiddle Encyclopedia.