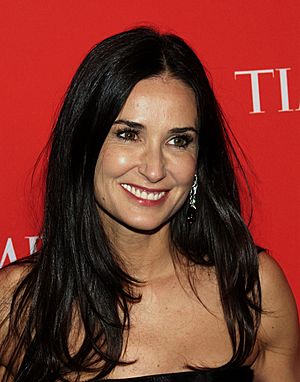 Demi Moore (born November 11, 1962 as Demi Guynes) is an American actress. She became well-known after a string of 1980s teen-oriented movies, and was one of the best known actresses of 1990s Hollywood.

She has been married to musician Freddy Moore and actors Bruce Willis and Ashton Kutcher. All her marriages ended in divorce. She has three daughters by Willis: Rumer, Scout and Tallulah.

All content from Kiddle encyclopedia articles (including the article images and facts) can be freely used under Attribution-ShareAlike license, unless stated otherwise. Cite this article:
Demi Moore Facts for Kids. Kiddle Encyclopedia.